Political leaders who have “overstayed their welcome” must be shown the door by their own people, former President Thabo Mbeki said at the weekend.

“Political leaders should not stay in positions forever, I agree,” said the statesman during a discussion with young people involved in his foundation in Johannesburg on Saturday.

“…But who makes sure that they go?”

Mbeki then turned to the example of Zimbabwe.

“I would fight with any South African who stands up to say: ‘I, as a South African, say Robert Mugabe must go’,” declared the ANC stalwart.

“I say it is none of your business. It is the business of the people of Zimbabwe…

“If the people of Zimbabwe think that president Mugabe has overstayed his welcome, let them say…president, please go away.”

Mbeki suggested that the larger context of decolonisation needed to be understood in these kind of scenarios.

“The colonial system was exactly about taking away the possibility for us to determine our own [destiny],” he said.

“Now I sit here as a South African and me, I’m going to say to the Zimbabweans: ‘You shut up. I’m going to decide for you who your leader is’ … It is wrong,” stated Mbeki.

Turning to the recent Fees Must Fall protests around university funding, Mbeki said that the issue had to be addressed within an understanding of all of South Africa’s needs and the limit of money available.

He said as students, they might be “addressing the thing that is in [their] world: fees must fall” but someone from an area that did not have proper infrastructure “is thinking, there is no water… no clinic… no roads… millions of unemployed… “

“Idealistically, I wish we could have it all, including fees must fall,” said Mbeki.

Nigeria: What Is the State of President Buhari's Health 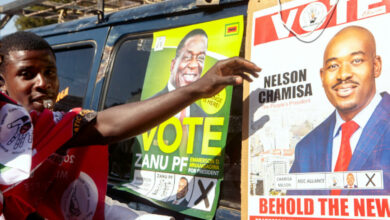