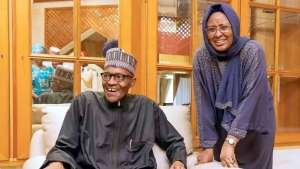 Most columnists, writers and public commentators have shied away from doing so but today yours truly will treat a matter and pose a question that is in the hearts and minds of many both within and outside Nigeria.

The question is whether President Muhammadu Buhari (remember him?) is actually dead or still alive. And, assuming that he is still alive, is he lost to the world like suffering from the extreme case of a disease?

These are the relevant and poignant questions that many are seeking answers to yet this whole matter and everything that flows from it, for some strange and inexplicable reason, is shrouded in the utmost secrecy and subtefuge.

The Presidency has told us that Buhari has travelled out of the country yet no-one has seen pictures or footage of him going out of Nigeria or arriving in his preferred destination in a foreign land.

Assuming that he really did travel out one wonders which country he was ferried to, whether he went there on his feet or on his back and whether he is presently on admission in a hospital or resides in a private or official residence.

The Presidency claims that he is still alive and we sincerely hope that this is the case.

They lie as if there is no tomorrow and consequently few believe anything that they say including the assertion that the President is still alive or that he is running the affairs of our nation from his sick bed in the United Kingdom.

The truth is that if the Presidency or the Federal Government told us that it was day outside most of us would be forced to assume that it was night.

That is how skeptical the more discerning amongst us are about what those in power tell us.

Between the rulers and the ruled in Nigeria today there is no trust.

Consequently we are under no obligation, given their compulsive and sociopathic affinity for mendacities and deceit, to believe anything that the Buhari admnistration or the Presidency tells us.

The bottom line is this: if the Worst has happened stop playing games, tell us the truth.

If he is alive let us know exactly what has afflicted him, what his condition is, where he is, how he is doing and, most important of all, give us PROOF OF LIFE.

Anything short of treading one of these two paths is not only dishonorable but also utterly reprehensible and amounts to nothing less than a glaring and singular insult to the collective sensibilities of the Nigerian people. Simply put, we have a right to know the truth.

The usage of lies, deceit, secrecy, subterfuge and disinformation in the administration of governance coupled with the promotion of indiscipline, the encouragement of impunity, the disobedience of court orders, the undermining of the rule of law, the destruction of democratic institutions and the lack of fairness and justice are the worst forms of corruption.

Sadly this govermment, more than any other in the history of our country, is guilty of each and everyone of these grave charges. This is deeply troubling and it gives us cause not only for concern but also deep introspection.

Meanwhile we congratulate Acting President Yemi Osinbajo for finally signing the 2017 budget. Even though we are already half way through the year, as they say, it is better late than never.

This is a step in the right direction and it is worthy of applause and commendation. However what causes some consternation and beggars belief is the asinine and childish assertion by Mr. Shehu Garbage of the Presidency that President Buhari “gave his permission” for the Acting President to sign it.

Honestly when I heard this contribution I didn’t know whether to laugh or to cry. I was constrained to ask when the Presidency had transformed from being Nigeria’s most powerful and exalted seat of power into a theater of comedy and a home for second rate comedians.

These people will do and say anything to hide or distort the truth and to humiliate and undermine the authority and standing of Acting President Osinbajo.

And the fact that Osinbajo allows them to get away with it is an eloquent testimony to his nauseating weakness and inability to take control and administer power in the way that he is expected to do.

After all we do not operate a monarchial system of government in Nigeria and Buhari is not a King. He does not have any “divine rights” and he is not a deity or a ruler with absolute powers.

He is simply a democratically-elected President who is bound by the rules and conventions of the constitution and who is meant to be nothing more than a servant of the people.

In this context the question that needs to be answered is simple and clear and that question is as follows.
Does an Acting President need the permission of a sick, and bed-ridden President, who has been compelled by his debilitating ill-health to formally hand over power to his second-in-command as the constitution dictates, to sign the budget? The answer is a resounding “no”.

This is especially so when we have been intimated and informed by an exciteable, well-known and rabidly pro-government and fanatically pro-APC online medium known as Saharareporters that the President is in a “vegetative state” and that he “cannot speak to those around him or recognise his environment”.

If the Presidents friends and supporters can write and publish such things about his medical condition what are the rest of us supposed to think or believe?

We have been assured by that medium that his situation is so critical that even his wife was barred from seeing him when she travelled all the way to the United Kingdom to do so.

If this is true (and up until the time that I am writing this contribution it has not been publicly refuted or denied) it raises some very serious questions and the first one of those questions is why the Presidency and the Federal Government deem it appropiate to hide the truth from the Nigerian people?

Yet it does not stop there. Mr. Eric Joyce, the well-known British ex-military, ex-Member of Parliament and serving MI6 operative who has always had a special interest in Nigeria and who has always been an ardent supporter and friend of the President and his government has come out boldly to suggest that Buhari is in bad shape and he has challenged the Nigerian people to ask the Presidency for proof of life. His words:

“For now, with no sight nor sound of the President and no proof even of life for some time, it seems that in a bid to manage the succession the Presidency may be lying to the public about the Presidents health or even life, and making Nigeria’s democratic status a mockery into the bargain”.

If we choose to reject Joyce’s suggestion that Buhari is in bad shape and we accept the narrative that he is critically ill, the assertion that he is in a position to “give permission” for the budget to be signed remains equally childish and absurd.

All you hear from them are animal-like grunts and groans and loud, fake orgasms.

This is corpsocracy in its most glaring, repugnant, primitive and repulsive form. It is a squalid and sordid attempt to impose a godless and alien system of governance which can be best described as the “rulership of the living by the dead” on the Nigerian people.

Nigeria cannot be ruled from the grave. She cannot and must not be ruled by the dark and faceless agents and sinister emissaries of a shrouded and embalmed Egyptian-like entombed mummy or the surrogates of a corpse that is either stone-cold dead or is dead to to the world and barely alive.

We deserve far better than that and we have the right to be told the truth no matter how bitter that truth may be.

The fact of the matter is that anyone that believes anything that this evil government tells them is truly lost.

The truth is that it was not Buhari that gave Osinbajo permission to sign the budget but rather evil mafia and dark cabal that runs this country in his name.

If those that put that statement out were not utterly shameless how can they even say publicly that an Acting President who is more than capable of running the country has to wait for permission or for backing from a sick President that no-one has seen or heard from in weeks to sign a budget six months into the fiscal year.

Clearly these people are drunk on power and it has affected their ability to reason properly or think straight. Clearly Nigeria is in a precarious position.

They are nothing but sadists whose declared intention is to keep us in bondage and rule for another “two hundred years”.

And even as our people are dying of hunger and being slaughtered on a daily basis by Fulani herdsmen and Boko Haram they offer no apology for their shameful and glaring incompetence and neither do they display any remorse for their inability to protect the people that they were elected to serve and defend.

Instead of doing that all they do is just tell us one lie after the other. For example when asked about Buhari’s medical condition the Minister of Information, Mr. Lai Mohammed, had the effontry and nerve to tell Channels Television that

“President Buhari is alive and well and he talks to Acting President Osinbajo every day!”

If anyone believes that hogwash they will believe anything! And the minute Lai said it his already big, fat and oversized nose grew ten inches longer.

What a terrible plague and affliction has befallen this nation

May God deliver Nigeria from the claws of evil