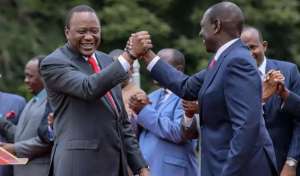 President Uhuru Kenyatta wrapped up his tour of the vote-rich Rift Valley today by addressing a huge rally at Bomet Stadium where he cautioned opposition supporters against listening to the messages of hate and division spread by their leaders.

President Kenyatta said inciting sentiments like those issued by opposition leader Raila Odinga in Kajiado were a recipe for violence, which Kenyans must reject.

“Sell your policies, we will sell ours and let Kenyans decide but do not incite Kenyans to fight. You cannot ascend to leadership by shedding the blood of your people,” President Kenyatta told Raila, as he addressed thousands of Jubilee supporters in Bomet.

The President, who was accompanied by Deputy President William Ruto and a host of other Jubilee leaders, warned the opposition that if they continued to incite Kenyans, the law would take its course.

“Stop branding Kenyans locals and non-locals. Every single citizen has a right to live and own property where they want within their country,” the President said.

The President said Kenyans should reject the opposition politicians who are bent on dragging the country back to the path of violence and instead vote for the Jubilee Party which stands for peace, development and prosperity.

Among the places the President and his deputy visited included Sotik, Mogogosiek, Tenwek and Silibwet before they addressed the rally in Bomet town.

At the rally where residents and local leaders declared Bomet a Jubilee zone, President Kenyatta highlighted the projects his administration has implemented in the county in the last four years.

The President also outlined his development agenda for Bomet County for the next five years if he gets a second term, top of which is the construction of a mega dam at a cost of Kshs 22 billion which will address the county’s water needs.

“For all those development projects to go on, we need your votes,” President Kenyatta said.

Deputy President Ruto pointed out that all the development projects initiated by the Jubilee Government in Bomet County and across the country are meant to lift the lives of Kenyans and create employment for the youth.

“We have constructed roads, upgraded and equipped the Longisa and Ndanai health facilities to the status of referral hospitals to boosted provision of crucial medical services to the residents and we have connected over 45,000 households to electricity compared to only 10,000 who had power before the Jubilee Government came to office in 2013,” the Deputy President said.

He chided Governor Isaac Rutto for his attempts to block the national Government’s efforts to transform Bomet County, saying residents should reject such counter-development leaders.

Speaking at the Bomet rally, Rift Valley leaders allied to Jubilee said the region is firmly behind the leadership of President Kenyatta and his deputy.

They said the Jubilee leadership has ensured peace, stability and development in the region among other parts of the country, saying they will not allow some few individuals to mislead them to support leaders who were thriving on tribal politics to achieve their selfish ends.

“We are here in Bomet as leaders from Rift Valley to tell Kenyans that residents in this region are firmly in support of the Jubilee Administration. Those claiming that Opposition has penetrated here will be in for a rude shock after August 8,” said Mr Murkomen.

The leaders, at the same time, criticized sentiments by Opposition leader Raila Odinga that all Kenyans who have settled in areas, which are not part of their ancestral lands, should go back to their original homelands.

President Kenyatta’s campaign blitz in the Rift Valley in the last few days has taken him to the counties of Uasin Gishu, Trans Nzoia, Nandi, Elgeyo Marakwet, Kericho and Bomet.