The new president of South Sudan’s Football Association Francis Amin believes he can use the game to unite a fractured nation.

For the past four years, South Sudan, the world’s youngest nation, has been torn apart by a civil war sparked by a political power struggle.

Thousands of people have been killed and hundreds of thousands more have sought refuge in neighbouring countries and beyond.

But Francis Amin, who was elected in elections supervised by Fifa, wants to develop the game throughout South Sudan – but also to use the sport to bring people together in a country scarred by massacres and killings on ethnic grounds.

“I’m trying to use football as a tool to unite the people of South Sudan; football can bring them together as one,” said Amin.

I’m trying to use football as a tool to unite the people of South Sudan; football can bring them together as one

Amin told the BBC that his priorities included developing the administration of the game, taking South Sudanese football to an African or even world level, and improving refereeing, coaching, women’s football and pitches around the country.

Lots of work then – and it will not be easy, in part because South Sudan’s civil war has devastated the economy.

‘I’m a businessman, actually, by profession, so I’m thinking of how to make an investment section in the football association.

‘When we get some income and after that get some facilities, it will be easy.’

Amin acknowledged that the economic challenges facing his nation are huge, but is hopeful of getting assistance from Fifa and the Confederation of African Football.

Sudan – the country South Sudan seceded from in 2011 – has promised to help train referees and coaches.

However, Amin was non-committal on the age-old issue of whether a foreign or a national coach would be best for the national team, the Bright Star.

But he said reports that he had personally help finance the team in the past were true – explaining that he did it out of “patriotism”.

Amin says he plans to launch a Super League in 2018, with games staged all over the country with the hope of bringing people together.

Where does he see South Sudanese football in five years time?

“The country will be at peace, and in that time we will compete in the Africa Cup [of Nations] and the World Cup – this is our dream.” 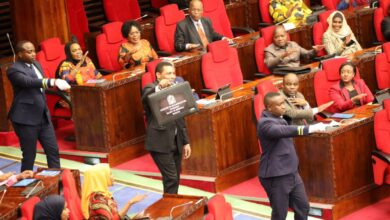