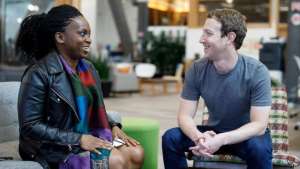 It is one of Facebook’s fastest growing communities and has become such a phenomenon that last week, Mark Zuckerberg asked to meet its founder. But what is Fin?

Female IN or Fin is a “secret” Facebook group that has recently clocked up over a million members, largely from Nigeria.

But it’s a secret that founder Lola Omolola wants you to know all about – if you’re a woman that is.

Though it has a vaguely romantic air, secret is just Facebook terminology, Ms Omolola says. It means invitation-only – you need to know a member to get in.

“It’s a safe place, for a woman who has something to say,” Ms Omolola explains.

“You don’t have to agree but it is her story, she can say it.”

The group is a sort of confessional space, where women share stories that they might be uncomfortable – or even afraid – to tell in person.

It doesn’t offer anonymity – members have to post under their real names.

And the stories are stunning, although they remain strictly confidential.

In the few days that I’ve been a Finster, I’ve read testimonies on domestic abuse, physical and emotional violence, child abuse and rape.

One woman speaks about the moment she told her parents she was about to have a child as a single girl of 17, another about finally being accepted as a lesbian by her mother after many years.

They are brave and intimate, telling of failed relationships or unconventional sexual preferences.

The posts are brutally honest but many of them are laced with self-deprecating humour.

Like the woman who mortified herself on a first date in front of a banquet hall of people or the lady who stole the keys of a bus driver after he bumped her car and refused to apologise.

Many of the stories speak of a distinctly Nigerian experience.

Until recently the group was called Female In Nigeria, so it’s not a surprise that most of its members are just that.

A former journalist, she moved from Nigeria to the US in the early 2000s at the age of 24 and started the group in 2015.

She had had an idea to start something for some time – a forum where Nigerian women could talk openly about the issues that affected them. But it was the kidnap of the Chibok girls that drove her to do it. 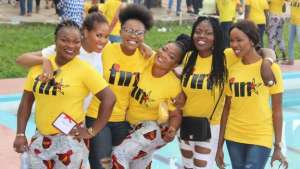 Finsters meet up in real life too

“When you grow up in a place where a woman’s voice is not even valid, everything reinforces that idea that we’re not good enough.”

It didn’t surprise her that a group of men could kidnap and enslave these girls, because they didn’t see them as equals.

“Between the ages of three and six I noticed that whenever a girl shows any sign of self-awareness she gets silenced. When I said anything I got a pinch – a real, live pinch.”

Those pinches came from aunties, uncles, even her mother but never from her father. And it’s him that Ms Omolola traces her early feminism to.

Her father was a part-time businessman and was often at home with the children while her mum worked as full-time haematologist.

“We never felt any gender disparity,” she says.

“I realise now how much effort it must have taken. It was not something he was just stumbling into. It was an active choice.”

Fin started out as a group where women could discuss women’s issues – one of the first blogs was on domestic violence – and Ms Omolola expected it to be an abstract conversation.

But women responded with their own stories. 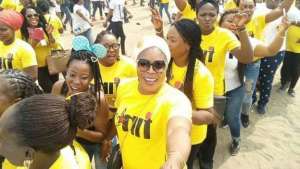 The group are unusually open with each other

Almost instantly it became a place where people could share things they had never shared before.

“When we started I used to cry. I stopped sleeping, I stopped eating,” she says. “I was not ready for the stories that were coming out.”

“There were women who had been abused for 40 years and hadn’t told anyone. No-one should live like that.”

Now the group gets hundreds of applications for posts every day but they are managed and approved by a group of 28 volunteers. About 40-100 make it on the page.

Fin has strict rules. Above anything else, Finsters are not allowed to judge each other. Any negative comments are removed, as is the member who posts them.

“I noticed that those people who try to shut women up in real life, they came there,” says Ms Omolola.

“They are so deeply conditioned to work against their own interest.

“It’s the online version of the pinch and the shush.”

But the pinchers and shushers were persistent.

In a religiously conservative society like Nigeria, expressions of female sexual freedom were never going to go unchallenged.

Some members tried to get around the ban by commenting with passages from the bible which condemned the woman’s actions.

That inspired a second rule – no preaching.

“We prohibit religious-themed advice,” it says in the rules. “Fin is not a place of worship.”

People have likened Fin and its founder to the devil, they’ve called the group evil, a corrupter of young women.

Ms Omolola says she has been the subject of concerted attacks by church groups. But she’s not worried.

“Most people think that the controversy would kill me,” she says. “They don’t realise that it’s actually empowering me.” 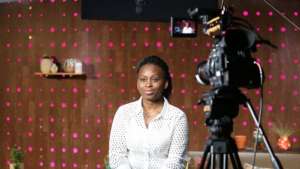 After amassing a million-strong membership and a high-profile meeting with Mr Zuckerberg, what is next for Fin?

Ms Omolola has dreams of expanding the group into bricks and mortar, providing centres where women can go to talk about their experiences in a safe space.

But that may be a long way off.

“It needs money and right now I have none,” she says. “I can’t even pay my rent.”

It’s something that she discussed with Zuckerberg and though Facebook haven’t offered funding yet, she’s still in conversation with it on how to move the group forward.

From day one, she says, she had offers from companies who want to advertise on Fin but she has refused to monetise women’s stories.

On Mr Zuckerberg’s prompt she is now focusing on promoting the message of the site – female empowerment and tolerance.

And she’s doing interviews for the first time.