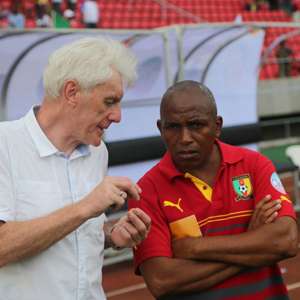 The coach believes his players will improve with experience after they fell to a 2-0 defeat in Moscow on Sunday Hugo Broos was proud of his Cameroon team despite the African champions slipping to a 2-0 defeat to Chile at the Confederations Cup.

Broos’ side overcame a difficult start, in which they looked like they would be swamped by Chile’s all-action approach, and gradually grew into the game only to be undone by late goals from Arturo Vidal and Eduardo Vargas.

The Belgian said: “I think we were a bit hesitant at the start, a bit afraid, because we knew we were playing against a very strong team.

“After about 20 minutes, we could have conceded three times. But after that we got much better and played very well in the second half. The first scoring opportunity for Chile was the goal after 80 minutes so, obviously, we are disappointed as far as the result is concerned but we can be very proud of our performance.”

Asked how Cameroon can bridge the gap to the likes of Chile, he added: “We have a young team and it needs to mature.

“We were also playing against a team ranked fourth in the world, 28 places above us, so there is a difference in quality and experience as well.

“I think we did fine. We lacked a bit of awareness on Chile’s goals but we will go step by step and improve gradually.”

The match was overshadowed to an extent by the use of the Video Assistant Referee (VAR) system that caused confusion on two occasions — first when Chile had a goal controversially ruled out for a marginal offside call and later when Vargas’ goal was given after initially being ruled out.

Broos said: “It was used twice during the match and it showed it can be very important. The first was disallowed because it was offside, those are the facts. But if it’s going to happen several times in a game it is not very pleasant for the players.”

With a large, and noisy contingent from Chile inside the Spartak Stadium, most neutrals appeared to be cheering for the Africans, a fact not lost on Broos.

“Today there were many supporters in favour of Chile but all the fans were enthusiastic, which was nice,” he said.

“I heard my team being supported and applauded several times, so I think these people were supporting my team.”