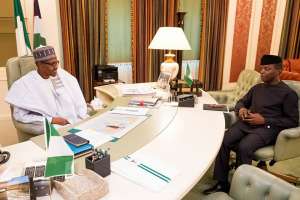 Nigeria’s Acting President, Yemi Osinbajo, has said that the Muhammadu Buhari administration would do everything to ensure unity among citizens of the country.

He says only unity among the people would guarantee development and enhance the welfare of citizens.

Mr. Osinbajo made the remark at his official residence, also known as Aguda House, on Sunday when he received the Muslim community in Abuja and environs that paid him Sallah homage, to mark the 2017 Eid-el-Fitr Sallah celebrations.

“Your ethnicity doesn’t matter and that is why for us, unity is so important that we must work together to make sure that our country is able to take care of the millions of people we govern.

“God expects us to take care of the poor and those suffering, to ensure that we use government resources only in such a way that will be for the good of the majority of our people,” he said.

The acting president re-echoed President Buhari’s sallah message to citizens in calling for unity among Nigerians.

He identified the gains of unity to include, love towards one another, integrity, enjoying the endowments of the nation, gaining respect globally and diversity among others.

“Our unity is not negotiable. We should make sure that we remain united in order to enjoy the resources God has blessed Nigeria with. So many nations envy what we have as a nation,” he said.

The Acting President used the opportunity to pray for President Buhari’s quick recovery and return to Nigeria, adding that the president still has a lot to do for Nigeria.

“He will serve this nation and complete the period of his service in good health, in good shape and our country will be the better for it,” he said.

Speaking earlier, the leader of the delegation and Minister of the Federal Capital Territory, Mohammed Bello, said paying sallah homage is customary as a mark of respect for the president.

He thanked security agencies, religious and traditional rulers in the FCT for playing a great role in sustaining the peace being enjoyed in Nigeria’s capital city.

He said the kind of harmonious relationship they have exhibited needs to be replicated in the 36 states of Nigeria.

There were goodwill messages from the Acting Imam of Abuja National Mosque, Mohammad Adamu, and the Chairman of the Christian Association off Nigeria, FCT Chapter, Samson Jonah.

The two clerics also prayed for the quick recovery of President Buhari.

The clerics commended the Acting President for guiding the country so well in the absence of his principal.

Present at the event was the Chief Justice of Nigeria, Walter Onnoghen, some legislators and members of the Federal Executive Council.