The Pentagon says it won its war against the Lord’s Resistance Army. But the notorious rebel group is far from a spent force. 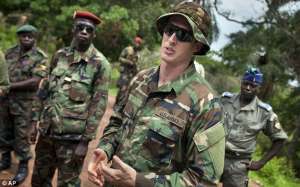 Last month, the Pentagon declared mission accomplished on its six-year, $800 million hunt for Joseph Kony. Though it failed to kill or capture the notorious leader of the Lord’s Resistance Army (LRA), a brutal Ugandan rebel force that has terrorized civilians across a wide swath of Central Africa for the past three decades, it succeeded in wearing down the group to its weakest point ever. Fewer than 80 armed fighters remain, down from 2,500 at the height of the LRA’s murderous rampage in the late 1990s. They are scattered across remote parts of three countries, where their primary objective is not to topple the Ugandan government but to survive another day.

But while it does not “currently threaten U.S. or Western interests in the region,” as Gen. Thomas D. Waldhauser, commander of the U.S. Africa Command (AFRICOM), said in recent congressional testimony, the LRA is not an entirely spent force. It has found a lifeline in wildlife poaching and other criminal activity, and its core leadership, including Kony’s two sons, who were both born into the group, has proved remarkably resilient over the years. In a region with little government presence and no effective national armies, the LRA could easily regroup. That possibility is made more likely by the U.S. military’s premature exit, which comes as its main partner in the hunt for Kony, the Ugandan military, is also picking up and leaving.

Failure to deliver the knockout blow means that the American effort to capture Kony, which began in 2011, may ultimately go down as a massive waste of taxpayer money. Without critical U.S. interests at stake, Barack Obama’s administration was unwilling to risk the lives of American soldiers. Hence the “advise and assist” mandate that left AFRICOM dependent on its Ugandan partners, who chafed under American tutelage and often resisted taking the fight directly to Kony and his inner circle.

Codenamed Operation Observant Compass, the U.S. anti-Kony mission was launched in October 2011 after years of lobbying by human rights advocates culminated in the passage of the Lord’s Resistance Army Disarmament and Northern Uganda Recovery Act of 2009, which Obama signed into law in May 2010. Approximately 100 American Green Berets, many with previous tours of Afghanistan and Pakistan, deployed to Uganda, South Sudan, and the Central African Republic (CAR) to aid the Ugandan Army in its ongoing campaign against the LRA. Beginning in 2012, U.S. forces participated in some joint patrols with the Ugandans, but mostly they provided intelligence, air, and logistics support.

With the Americans mostly on the sidelines, the success of the mission was largely dependent on the performance and commitment of the Ugandan Army, which had tried and failed to deal with the LRA for nearly a quarter-century. Estimated at 50,000 troops, including a modest air wing, the Uganda People’s Defense Force has never fully outgrown its rebel infancy. Many of the so-called bush commanders who led the insurgency that brought President Yoweri Museveni to power in 1986 are still in charge, presiding over an army that has been accused of corruption, indiscipline, and human rights abuses. In fact, the LRA was formed in 1987 as a response to those abuses, though Museveni’s government has largely succeeded in portraying Kony as a lunatic and his followers as irrational.

Reassured by their own propaganda, Ugandan Army analysts devoted little time to building a cogent theory of how the LRA operated, and they never fully grasped Kony’s extraordinary ability to survive and evade capture. Underestimating the LRA would prove a costly error. After an early and abortive attempt at peace, Kony secured the backing of the Sudanese government, which was battling Ugandan-backed rebels in its southern regions and happy to train and equip his army of abducted child soldiers — so long as they carried out the occasional attack against the southern Sudanese rebels.

The Ugandans launched operation after operation against the LRA, but were thwarted by poor equipment and lack of contingency planning. Operation Iron Fist, launched in 2002, for example, pushed the LRA from southern Sudan back into northern Uganda, where they wreaked havoc on the civilian population.

The end of Sudan’s north-south civil war in 2005 effectively ended Khartoum’s support for the LRA, forcing the group to relocate to Garamba National Park in the Democratic Republic of the Congo. This marked the beginning of the LRA’s decline as well as the beginning of U.S. involvement in the conflict. In June 2006, Jendayi Frazer, President George W. Bush’s assistant secretary of state for African affairs, told a crowd of journalists in Entebbe, Uganda, that the United States planned to bring about an end to the conflict by the end of the year. After yet another failed attempt at negotiating peace, the Bush administration began aiding the Ugandan military effort. In December 2008, it provided intelligence for a massive air and ground assault on LRA bases in Garamba. But poor coordination and planning once again hampered the Ugandan Army, with Kony and most of his 800 or so fighters escaping unharmed. In retaliation for the strike, Kony ordered the killings of close to 1,000 Congolese civilians, whom he faulted for allowing the Ugandan Army inside Congo. 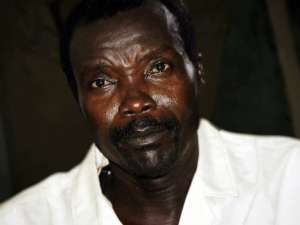 If US Special Forces left without getting Kony, who would?

By early 2011, Kony and his fighters had walked hundreds of miles through dense and largely uninhabited forests to Kafia Kingi, just south of Sudan’s Darfur region. There, Kony established a new base of operations, sending small groups of fighters to poach elephants in Garamba so that their tusks could be exchanged for food and ammunition. When American soldiers entered the fray in late 2011, the LRA numbered just 400 people, including women and children, divided into at least seven groups operating in three countries. All of the groups had settled into survival patterns that included poaching and raiding villages. None were carrying out offensive operations against military targets. 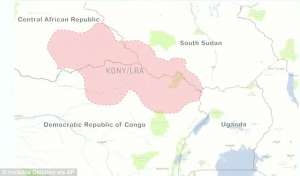 In the first two years of Observant Compass, the LRA’s numbers were halved to about 200, and at least three top commanders, including Kony’s deputy, Okot Odhiambo, surrendered or were killed. (During this time, there was at least one daring and possibly illegal Ugandan commando incursion into Kafia Kingi that missed Kony by a matter of hours.) But by the end of 2014, the joint mission was losing momentum. Mounting discord between the Ugandans and their American partners undercut the effectiveness of the mission, according to Ugandan officials. Some Ugandan officials resented the fact that American soldiers, who had limited knowledge of the LRA and were stationed in air-conditioned units far from the frontline, wanted to teach veteran Ugandan soldiers how to chase Kony. Some Ugandan commanders had expected to lead the mission and exercise control over American air assets, including transport planes and helicopters. They were upset when the Americans treated them as junior partners in their own backyard.

Meanwhile, the Americans began to question the Ugandans’ commitment to the mission. According to U.S. officials with knowledge of Observant Compass, Ugandan soldiers proved competent at tracking LRA groups through the jungle, but they often stopped short of ambushing or otherwise neutralizing them once they had been located. LRA fighters who defected, some of whom ended up fighting for the Ugandan Army, claimed that some Ugandan soldiers were afraid to confront Kony’s group directly because they believed he possessed special powers. Ugandan soldiers allegedly also became involved in sexually exploiting underage girls and looting natural resources in the Central African Republic, behavior that increasingly put them at odds with local communities and their American partners.

The mission dragged on for years, threatening to reach the $1 billion mark, but Kony remained elusive. Rumors abound that he is still based among several small outposts in Kafia Kingi, making periodic incursions into the Chinko River basin in eastern Central African Republic. In 2016, then-AFRICOM boss Gen. David Rodriguez derided the fight against the LRA as “an expensive albatross,” but Pentagon and State Department officials continued to support it on the grounds that it gave special operations forces experience in a unique jungle terrain (apparently the per diems weren’t bad either).

Now the Trump administration has ended the party, throwing the legacy of the mission into question. Through a combination of military pressure and defection campaigning, Observant Compass managed to cull the LRA to fewer than 100 fighters, though it never achieved its ultimate goal. Ironically, Kony may succeed where AFRICOM failed if he continues his paranoid behavior of executing his own commanders. If he manages to survive and regroup, however, it will be because the United States declared mission accomplished before it actually finished the job.