SEVEN pro-Biafra groups on Wednesday agreed to work together under the leadership of Nnamdi Kanu, leader of Indigenous People of Biafra, IPOB, with the aim of achieving faster, their quest for referendum that will lead to the formation of the Republic of Biafra.

The groups said they decided to work together so that they would be speaking with one voice, seeking one objective of securing the Republic of Biafra.

This came as IPOB, yesterday, accused the All Progressive Grand Alliance, APGA, in Anambra State  of jealousy over its comments that  its leader, Kanu, should stop parading himself as an Igbo Emperor, adding that APGA will cease to exist as a political party after November 18 gubernatorial election in the state.

Rising from a closed door  meeting with Kanu, attended by  over 5,000 people from various groups in Afaraukwu, Kanu’s native home, to witness his appointment as the overall leader of Biafra, Uchenna Madu, who addressed journalists, said the decision was to work together and speak with one voice under a central leader, saying, however, that all the groups still exist but would be speaking with one voice as the quest for referendum hots up.

“Distinguished members and great people of Biafra and supporters of divine mission of emancipation of the land of Biafra from the oppressive  Nigeria State, we salute you. Today, we stand in this holy land of Biafra in unique and brotherly gathering to honour our own brother, who distinguished himself in the self-determination struggle for Biafra actualisation and restoration.

“Mazi Nnamdi Kanu’s leadership shall bring unity, peace, progress and brotherly love among the esteemed people of Biafra through the instrumentality of mutual and intimate understanding among the pro-Biafra groups.”

The groups are Movement for the Actualization of Sovereign State of Biafra, MASSOB;  Biafran Revolutionary Organisation, BRO; Eastern People Congress, EPC; Joint Revolutionary Council of Biafra, JRCB; Biafra Liberation Crusaders, BLC; and Salvation People of Biafra, all of whom agreed to work indiscriminately with the Kanu-led IPOB to pursue the Republic of Biafra.

Nnamdi Kanu said he was humbled by the decision of the various groups and assured that he would not let them down. He said: “I am humbled by this decision of the groups. We started together and we have all ended up together because we are sincere and purposeful. I am not in the habit of letting my friends down. Everybody will be carried along; if I am invited for any meeting, I will take some people along. Today is a great day for Biafrans all over the world.

According to him, it is  referendum or nothing. He said Aburi agreement was reneged on by Nigerian government and that the 2014 National Conference was dumped where it was coated by dust until the Biafra agitation became intense and it was remembered.

On whether the IPOB  has formerly written to the United Nations demanding referendum, Kanu said the best letter was the continuous civil disobedience, which he said serves as “handwriting on the wall  for the government. They wake up to see it everyday.”

A United Nations observer, Prof. Nwaimo Emma, was around, yesterday, to see what was going on. According to Nwaimo, who said he is a professor of religion, he was overwhelmed with the crowd he saw and said he would report back to the United Nations the true position of what he observed. 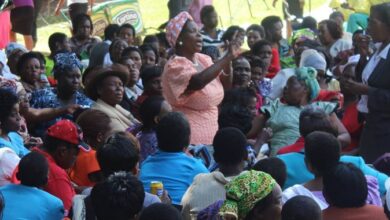