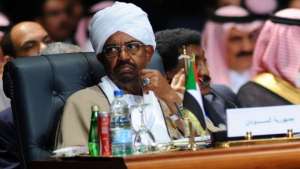 Saudi Arabia has invited Sudanese President Omar al-Bashir, who is wanted for alleged war crimes, to a summit with US President Donald Trump and Arab and Muslim leaders.

The minister added that he hopes US sanctions against Sudan will be lifted in July, and said he believes the US wants to normalise relations.

The US has not confirmed the claim.

Economic sanctions were imposed against Sudan in 1997 after the state was labelled a “sponsor of terrorism”.

President Barack Obama signed an executive order easing some of the curbs in January, shortly before leaving office.

Mr Obama had delayed the reduction in sanctions by 25 weeks, to give the Sudanese government an incentive to continue its reforms.

Relations between the US and Sudan have not been tension-free of late, however.

The country was one of seven included in Mr Trump’s proposed travel ban, along with Iran, Iraq, Libya, Somalia, Syria and Yemen.

It is not known whether Presidents Bashir and Trump will meet when the US leader arrives in Saudi Arabia on Saturday.

The visit is Mr Trump’s first overseas trip since taking office, and he is scheduled to address the summit on his “hopes for a peaceful vision of Islam”.

In 2009 and 2010, the International Criminal Court issued arrest warrants against Mr Bashir for genocide, war crimes, and crimes against humanity related to the conflict in Darfur, which has claimed at least 300,000 lives.

He denies the charges, and has successfully evaded arrest for several years.

The ICC is based in The Hague, and was established in 2002 to try the world’s most grievous crimes, when national courts are unable or unwilling to act.

A US official told NBC News that the Trump administration opposes invitations or travel by individuals facing ICC indictments.

“The United States has made its position with respect to Sudanese President Omar al-Bashir’s travel clear,” the official said.

“While the United States is not a party to the Rome Statute, which is the treaty that established the International Criminal Court, we nevertheless strongly support efforts to hold accountable those responsible for genocide, crimes against humanity, and war crimes, including such acts in Darfur,” the official added.