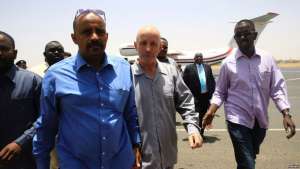 The French citizen (center) who was abducted south of Abeche, arrives at Khartoum airport after his release, in Khartoum, Sudan, May 7, 2017.

A Frenchman who was kidnapped in Chad in March and taken to the restive Darfur area of Sudan has been rescued in a raid organized by France, Chad and Sudan and was handed over to French authorities on Sunday, Sudanese officials said.

They said the kidnappers had demanded an undisclosed ransom for the man, an employee of a French mining company operating in Chad. He was abducted south of Abeche, a mining area about 800 km (500 miles) east of Chad’s capital, N’Djamena, and 150 km from the border with Sudan.

The Frenchman arrived on Sunday morning in the Sudanese capital Khartoum, where he was handed over to French Embassy officials at the airport.

The French president’s office confirmed that the hostage had been freed, without giving details of the rescue.

“The President of the Republic has learned with great satisfaction about the release of our compatriot who was abducted in eastern Chad and then taken by his captors to Sudan,” it said in a statement.

Sudan has been working with Chadian and French authorities for weeks to secure the release of the Frenchman.

Mohamed Tabiedy, a spokesman for the Sudanese security and intelligence service, told reporters that the Frenchman had been freed in a rescue mission carried out in coordination with Chad and French intelligence. Five kidnappers were arrested in the raid and would be tried, he said, adding that no one was hurt.

Sudanese officials said the Frenchman had not been abducted by any of the known rebel movements that are battling Sudan’s government but by an armed group in the border area.

Kidnappings are rare in Chad, a former French colony in West Africa, but the remote eastern border area has seen decades of back-and-forth movement by armed groups, including rebels fighting the Sudanese government.

Before this case, the last French national kidnapped in Chad was an aid worker seized in the eastern frontier area in 2009.

He was released nearly three months later in Darfur.

Around 1,000 French troops are stationed in Chad, which hosts the headquarters of France’s 4,000-strong regional anti-militant operation, known as Barkhane.