-With Wheel to Africa, a young American and his friends highlight the importance of people-to-people engagement in US-Africa relations.

Today Saturday, May 13, 2017, I pulled up into Bethesda Library Parking lot on Arlington road.  Bethesda is an affluent Maryland town in the suburb of Washington DC the nation capital.  I am here to meet Jason a college rising sophomore in African studies who spent summers in Africa, mainly Tanzania and Ghana. Jason and his friends under the guidance of his parents are collecting bikes to ship to Africa as part of the Wheel To Africa Initiative.

As soon as entered the parking lot I was greeted by a jubilant and grinning group of kids happy to see the two bikes attached on the back of my car. I could not help but to reminisce, back to the day… I mean, way back when I received my first bike as a child and how happy it felt then. Thinking about it, I am sure it is probably a fair statement to say that, these kids look as happy as the people who will soon be receiving these bikes in the continent of Africa.

Upon getting out of my vehicle, I met and greeted Jason Kohn the young men who initiated today’s event, his parents, and a few of his friends, all passionate about Africa. I introduced myself and we talked about their initiative and their passion for Africa while some of the kids unloaded the two bikes I donated and stacked them against dozens of others bikes neatly arranged on the asphalt. I spent few more minutes’ chit-chatting before saying goodbye, and got into my car.  While I was putting the key in the ignition to start the car, I murmured to myself, “Jason loves Africa… so does America” before driving off…

In today’s America where most in the international development community are wondering about the Trump administration stance on Africa, Jason and his friends with their good deeds remind us, this simple fact; before there was a government, there are people and there lies the answer. 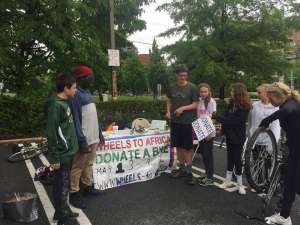 A strong and stable relationship between the United States and Africa is undoubtedly at the center of the Trump overall foreign relations. Washington’s support to the security of the continent, especially as part of the global war on terrorism is probably an essential part of “making America great again” US foreign policy, however many non-governmental or “people-to-people” interactions such as trade and cultural exchanges as well as initiatives such as Jason’s are paramount. This dependence is expected to remain unchanged in the foreseeable future.

As history teaches us, whether it be slavery, the rise of African Nationalism, or the Cold War, America and the African continent have a complicated history full of contradictions, but ultimately the strength of the relationship lies in people-to-people engagement on both continents.

About Wheel To Africa:

During a vacation in Africa with his mother, 10-year-old Winston Duncan was struck by the distances that people had to walk to find food, water, and medical care. It was then that he decided that he needed to find a way to help

His answer: Collect bikes, because “everyone has an old bike”!

In Africa, a bike is a lifeline to survival for many people. It is often their only means to access food and water, markets, education, and jobs. Winston’s passion has motivated family, friends, neighbors and acquaintances to organize annual drives across three states

*Omar Arouna is the immediate past Ambassador of the Republic of Benin to the United States of America. He answers regularly present to initiatives that touch on US-Africa Relations and is President & CEO GlobalSpecialty, LLC.

Shafana: The journalist who believed in Somalia