A European Union official in Rwanda says President Paul Kagame is likely headed toward re-election, and says he doubts the EU will send monitors to observe the vote.

Michael Ryan, head of the EU delegation to Rwanda, spoke to journalists in Kigali Thursday, a day after a 35-year-old woman whose father was killed under unclear circumstances said she would challenge Kagame in the August election.

“I think you would not lose any money if you bet on Mr. Paul Kagame,” Ryan said in response to a question posed by VOA’s Central Africa Service.

“We have a leader who has evidence of his work in front of everybody. And you have candidates who have to prove [themselves]. They are untested and they have to prove,” he said.

Kagame has effectively ruled Rwanda for 23 years and is widely credited for stabilizing the country after the 1994 genocide that killed an estimated 800,000 people.

Critics say Kagame’s rule is autocratic and intolerant of opposition. They are outnumbered, however, and some observers think Kagame’s popularity is the reason the EU is not sending election monitors to Rwanda this year.

Ryan maintained Thursday that the decision is mainly a financial one. “It is a very expensive exercise,” he said, adding that there are fewer reasons to be in Rwanda than in other countries where elections could be more controversial.

Diane Rwigara announced Wednesday that she would challenge Kagame, becoming the first female to announce her candidacy.

She is the daughter of a prominent businessman who was killed when his car was rammed by a truck. The Rwanda National Police called it an an accident but his family believes it was foul play and has appealed to Kagame to investigate.

“Other Rwandans face similar problems, not just my family alone and therefore I have to end their misery,” Rwigara said.

She said she knows how it feels to be a victim.

“Having dissenting views shouldn’t be a crime,” she said.

There are two other declared presidential candidates, one from Rwanda’s tiny opposition party and another independent.

In order to be allowed to run, the candidates must gather 600 signatures, including at least 12 from all of Rwanda’s 30 voting districts.

Once they make the ballot, candidates will have only three weeks to campaign.

Ryan says the EU told Rwanda’s election body that the rules are limiting to presidential challengers.

“Having to register only a few weeks before, having three weeks to campaign and if you are an independent having virtually no opportunity to raise money and to show yourself to the people… It’s that environment in which I suspect the outcome will be fairly predictable.” 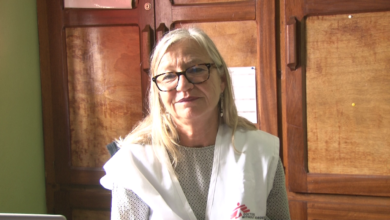