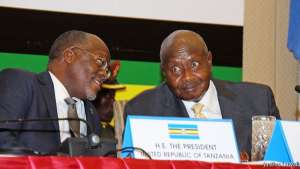 THE winds that waft along the Swahili coast change direction with the seasons, a boon to traders in times past. Shifts in the political winds are harder to predict. Last July a proposed trade deal between five countries of the East African Community (EAC) and the EU was thrown into disarray when Tanzania backed out at the last minute. An EAC summit, scheduled for months ago, was meant to find a way forward. Held at last on May 20th in Dar es Salaam, after many postponements, only two presidents showed up. The deal is in the doldrums.

The pact is one of seven “Economic Partnership Agreements” (EPAs) the EU wants to sign with regional groups in Africa, the Caribbean and the Pacific. The first was agreed with the Caribbean in 2008; southern Africa followed suit last year. But progress in west Africa has also stalled, with Nigeria raising objections. The EPAs were promoted as a new breed of trade deal, and were supposed to bring development and regional co-operation. So far they have brought neither.

Negotiations on EPAs began in 2002. Under previous conventions, the EU gave favourable market access to African, Caribbean and Pacific countries, most of them former colonies. That fell foul of World Trade Organisation rules. Hence the idea of EPAs: reciprocal deals, requiring both parties to open their markets.

Two obstacles have to be surmounted. First, EPAs overlap with existing trade arrangements. The poorest countries, like Tanzania, already enjoy duty-free and quota-free access to the EU under an initiative called “Everything But Arms”. That could one day be withdrawn, but at present they see little to gain by opening their markets.

Second, countries within the same region face different incentives. Take Kenya, richer than Tanzania and not eligible for Everything But Arms. It ratified the EPA last year and needs others to do so for the deal to come into force. It recalls the pain of 2014, when the EU briefly slapped tariffs on its exports, such as cut flowers, and is frustrated by Tanzanian foot-dragging.

A more profound question is whether EPAs really are good for development. African manufacturers worry about European competition: nascent industries are “prone to being overrun” by imports, warns Segun Ajayi-Kadir of the Manufacturers Association of Nigeria, which lobbies against the west African deal. EU officials point out that slashing tariffs will help manufacturing by making imported machinery cheaper. African markets would open gradually, and some sectors are excluded. Details vary, but EPAs typically liberalise about 80% of imports over 20 years. Many of those goods already enter duty-free.

The EPAs would make it harder (though not impossible) for countries to use certain kinds of industrial policy, such as export taxes. The EU does not think such policies do much good anyway. But some governments do, and do not want their hands tied. They fear that promised safeguards, such as an “infant industry” clause, to protect some domestic businesses, would be hard to invoke. They will also lose tariff revenues, an important source of income in countries where other taxes are tricky to raise. It all adds up to a “form of colonialism”, fumes John Magufuli, Tanzania’s interventionist president.

Economic evidence is mixed. Although models typically find trade gains on both sides, it is European exporters that would be the biggest winners. Within Africa, gains would mostly accrue to better-off countries in sectors such as sugar, meat and dairy (rather than to manufacturing industry). Their extra sales to the EU would come partly at the expense of trade with African partners, says David Luke of the UN Economic Commission for Africa.

Ultimately “it’s about politics”, argues San Bilal of the European Centre for Development Policy Management, a think-tank. The EPAs are mired in regional rivalries, he notes, against a backdrop of global trade uncertainty after the Brexit vote and Donald Trump’s election. The next step for the east African deal is a quixotic mission to Brussels with Yoweri Museveni, the Ugandan president, at the helm. Don’t expect the trade winds to start blowing.