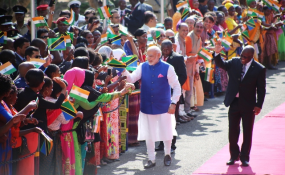 Photo: Mohamed Mambo/Daily News
Indian Prime Minister Narendra Modi and his host, President John Magufuli, acknowledge cheers from a section of Dar es Salaam residents who turned up at the State House grounds in the city.

Abidjan — Africa, like India, is a continent of rich and compelling diversity. Both continents share a similar landscape, a shared colonial history, and similar economic and demographic challenges. This helps both India and Africa work especially well with each other.

This cooperation is both a mutual privilege and priority. At the end of the 2015 India-Africa Forum Summit, Indian Prime Minister Modi announced very substantial credits and grant assistance which benefitted our relationship. In addition to an India-Africa Development Fund, an India-Africa Health Fund and 50,000 scholarships for African students in India were established.

India’s bilateral trade with Africa has risen five-fold in the last decade, from $11.9 billion in 2005-6 to $56.7 billion in 2015-16. It is expected to reach $100 billion by 2018. This is attributed largely to initiatives by India’s private sector, and here again we are on the same wave length. We understand and appreciate that the private sector will be the critical element in Africa’s transformation.

African countries are targeted by Indian investors due to their high-growth markets and mineral rich reserves. India is the fifth largest country investing in Africa, with investments over the past 20 years amounting to $54 billion, 19.2% of all its total Foreign Direct Investment.

At the same time a transformed Africa is taking shape. Despite a tough global economic environment, African countries continue to be resilient. Their economies, on average, grew by 2.2% in 2016, and are expected to rise to 3.4% this year. But the average does not tell the true picture. Indeed, 14 African countries grew by over 5% in 2016 and 18 countries grew between 3-5%. That’s a remarkable performance in a period when the global environment has been impeded by recession.

By 2050, Africa will have roughly the same population as China and India combined today, with high consumer demand from a growing middle class and nearly a billion ambitious and hard-working young people. The cities will be booming, as the populations (and economic expectations) rise exponentially around the continent.

This is the busy and bustling future that Africa and India must shape together in a strategic partnership. And nowhere is this partnership more needed than on the issue of infrastructure.

At the top of the list is power and electricity. Some 645 million Africans do not have access to electricity. It’s why the African Development Bank launched the New Deal on Energy for Africa in 2016. Our goal is to help achieve universal access to electricity within ten years. We will invest $12 billion in the energy sector over the next five years and leverage $45-50 billion from the private sector. We plan to connect 130 million people to the grid system, 75 million people through off grid systems and provide 150 million people with access to clean cooking energy.

The African Development Bank is also in the vanguard of renewable energy development and the remarkable “off-grid revolution” in Africa. We host the Africa Renewable Energy Initiative, jointly developed with the African Union, which has already attracted $10 billion in investment commitments from G7 countries.

Universal access requires large financial investments. By some estimates, Africa needs $43-$55 billion per year until the 2030s, compared to current energy investments of about $8-$9.2 billion.

We must close this gap. And to do so, the mobilization of domestic resources will play a major role. Pension funds in Africa will reach $1.3 trillion by 2025. Already tax revenues have exceeded $500 billion per year. Sovereign wealth funds in Africa stand at $164 billion.

Moreover, the African business environment keeps improving, with easier regulations and more conducive government policies to attract the global investors. In 2015, Africa alone accounted for more than 30% of the business regulatory reforms in the world.

The fact is, we have already started to transform Africa. This is the territory of the High 5s: Light up and Power Africa; Feed Africa; Industrialize Africa; Integrate Africa; and Improve the Quality of life of Africans.

We can forge winning partnerships investing in power generation, energy, agro-aligned industrialisation and food processing. In doing so we can work on the synergies that exist between infrastructure, regional integration, the regulation of enterprises, employment, health and innovation.

In each of these areas I see the prospect for cooperation and collaboration with Indian partners. For example, we are partnering with the EXIM Bank of India and others to establish the Kukuza, a company based in Mauritius, to help develop and support public-private partnership (PPP) infrastructure project development and finance.

India is already one of the top bidders for Bank projects. This is a reflection of its immense expertise in a diverse range of areas from engineering to education; from ICT to railway development; skills development to regional integration; and from manufacturing to industrialisation.

It is our pleasure to partner with such an inveterate and committed investor in Africa. And may this investment be lucrative and justified, and may our mutual interest and cooperation continue for many years to come.

*Allafrica.Dr Akinwumi Adesina is President of the African Development Bank. The 2017 AfDB Annual Meetings will be held in Ahmedabad, India, 22-26 May.