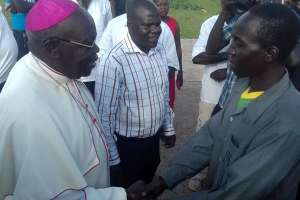 Lt Michael Omona, 33, defected on January 20, from the jungles of Central African Republic (CAR) after spending 23 years in captivity.

He was airlifted to Gulu on Monday and welcomed by religious leaders led by Gulu Archbishop John Baptist Odama, security officials and cultural leaders amid ululation from relatives at Gulu Airfield.

He was abducted by LRA rebels in 1994 at his ancestral home in Alero Sub-county in current day Nwoya District while still in Primary Five at Alero Primary School. According to Ugandan security officials, Mr Omona, a father of two, first surrendered to the Seleka rebels in Central African Republic before being handed over to the UPDF and American security agents in Obo. Speaking to Daily Monitor in an interview on Monday, Mr Omona said his plans of defection followed an order by Mr Kony, who summoned his group comprising 30 rebels, to meet him at an undisclosed venue in CAR.

“We had lost touch with other LRA commanders and Mr Kony himself for two months. We were being commanded by Maj Okot Owila but we later got reports that Kony wanted to meet us and I thought to myself I wasn’t going to go back to him, so I escaped on my way from Lukoto river,” Mr Omona said.
He added: “I wandered in the jungle for ten days before entering the Seleka rebels’ held territory in Sam Ouandja. I surrendered to them and their commanders later took me to the UPDF who treated me well.”

“I want to thank my parents, religious and cultural leaders for the prayers. I want to thank God that I escaped and reached home safely because it wouldn’t have been possible without Him,” Mr Omona said.

Archbishop Odama applauded the UPDF and the American government for their efforts in bringing home ex-LRA fighters and urged those still in captivity to take the opportunity and surrender.

Lt Hassan Kato, the 4th Division infantry spokesperson, said the continued pressure UPDF has put on LRA remnants in the jungles of CAR has made life unbearable for Kony and his men.

“Kony can no longer administer his men and they are left with no option but to defect to UPDF,” Lt Kato said.

The LRA war that lasted for nearly two decades led to the displacement of more than 1.5 million people with tens of thousands losing their lives while women and children were abducted and turned into child soldiers and sex slaves.