Rwanda is expecting more than $100 million in investments from Morocco. 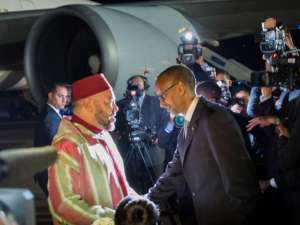 Rwanda’s Paul Kagame with the King of Morocco

Acting head of investment promotion at the Rwanda Development Board (RDB) Winifred Ngangure Kabega said at a press conference Monday that the money would be invested in different sectors of the economy including tourism, energy and infrastructure.

Kigali hosted more than 100 Moroccan investors and government officials Monday in what was dubbed the “African Business Connect,” where the delegation from North Africa presented Rwanda with the multimillion dollar investment opportunities.

“We are looking at approximately $100 million worth of investments from Morocco,” said Ms Kabega. “Back in October we signed a partnership agreement for the avoidance of double taxation and prevention of fiscal aversion with respect to taxes on incomes.”

She added: “We also signed an agreement on reciprocal investment promotion, tourism promotion and development of special economic zones.”

The two countries are seeking to boost trade flows and cement economic and political ties.

A 5,000 units low-cost housing project worth $68 million for example, was meant to kick-off in Kigali this year.

However, the groundwork for the project by Moroccan firm Palmerie Development Group, has been postponed to January next year, as the firm is winding up negotiations with the government.

“That is a major reason Morocco is seeking friendship and economic mutual benefits with Rwanda through private sector investments,” he said.

The visit also culminated in the planned acquisition of the majority shares in a local bank – Cogebanque – by Attijariwafa Bank, which is part of King Mohammed VI’s holding company the National Investment Company – Société Nationale d’Investissement.

But as of Monday, the deal had not yet been concluded, according to the director-general of financial stability at National Bank of Rwanda Peace Uwase.

“As of now I am not aware of any concluded deal,” she said in a phone interview.

Trade flows between Rwanda and Morocco have been on the lower end of the scale, standing at just one per cent of total volumes last year, according to RDB.