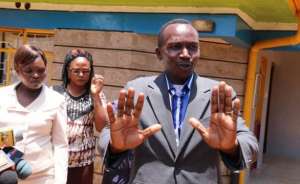 Photo: Charles Wanyoro/The Nation
Pastor Robinson Karumba of Eagle Wings Prophetic Ministries addresses the press at Gakwegori funeral home where he demanded to be given his wife’s body to pray for her resurrection.

Hundreds of mourners in Embu Saturday attended the burial of a 38-year old musician whose husband caused a stir after storming a local mortuary to pray for her resurrection.

Tens of clergymen who attended the burial at Rwika Village defended the actions of Apostle Robinson Karumba, saying it was a demonstration of faith among believers.

The clergyman had on Wednesday stormed Gakwegori Funeral Home accompanied by seven members of Eagle Winners Prophetic Ministry and spent over three hours praying for her resurrection.

Rev Karumba had clung on to hope that his wife would rise from the dead and Saturday would merely be a thanksgiving ceremony.

However, Bishop Ben Mwendandu, who led the requiem mass for Ms Pollyrose Ng’endo, said miracles still happen in this age depending on the will of God.

Most of the villagers were eager to see whether the family would make a last attempt at the resurrection bid or they would resign to fate and finally lay her to rest.

“Someone asked me why we exercise our faith by praying for the dead yet the dead don’t rise. I always tell them that we are behind a screen, only God decides.

“There are those who die before their time, like soldiers in battle but others who die and God says their fate is sealed,” Bishop Mwendandu told the mourners.

Bishop Mwendandu also blamed the failed prayers on the worshipers’ lack of discretion.

“You should pray in secret and not broadcasting [through the] media. I have prayed for many people, some who died and others got healed,” he advised.

Earlier on, journalists filming the proceedings were forced to leave the function with majority of speakers claiming the media wanted to embarrass them.

Pastor Karumba’s mother broke into angry shouts demanding that the journalists leave the family to bury their daughter and not report the proceedings of the burial ceremony.

Bishop David Mutwiri said many people have doubts on the ability of modern day clergy due to the proliferation of false preachers who are only after making wealth.

“When we pray for someone and they don’t resurrect, we should not despair.

“We have always prayed for many things and some don’t happen. Does it mean that God doesn’t exist?

“Not all prayers are answered. The problem is that people are no longer praying for the right things, only for wealth such as livestock,” said the head of Perazim Mission Centre.

The body was finally interred shortly after 5pm.