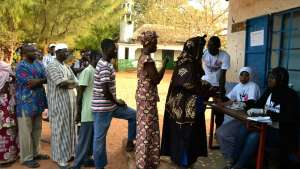 Official results show the party took 31 of the 53 available seats in the country’s National Assembly.

The vote was the first time Gambians had gone to the polls since President Yahya Jammeh stepped down in January after 22 years as head of state.

President Adama Barrow was hoping for a majority to be able to bring in political and security reforms.

He won December’s presidential election as the flag bearer for an opposition coalition including the UDP.

The results were announced by chairman of the Independent Electoral Commission Alieu Momar Njai who said the turnout was 42%.

Five more seats are appointed by the president meaning there is a total of 58 seats in the chamber.