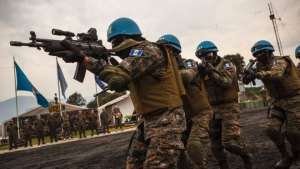 Monusco is the largest UN peacekeeping mission in the world

The UN Security Council has voted to cut the size of Monusco, its largest and most expensive peacekeeping mission, which operates in the Democratic Republic of Congo.

The UN force is already undermanned by close to that number.

The move came as a political deal brokered by the Catholic Church to pave the way to presidential elections collapsed, leaving the country on edge.

Several UN member states have signalled a desire to cut spending on peacekeeping, in particular the new Trump administration in the United States – which is the largest donor.

On Wednesday, the US ambassador to the United Nations, Nikki Hailey, said the UN was partnering with a “corrupt” government in Congo, and called for the downsizing of Monusco.

Monusco was instrumental in defeating the M23, the largest rebel group in DR Congo, by setting up special brigade authorised to resort to use force if necessary.

However it has also faced violent demonstrations and attacks by civilians, who accuse it of being ineffective.

Most of the anti-UN protests have taken place in the eastern region of Kivu, where armed groups continue to commit massacres, especially in the Beni region.

In the region, peacekeepers have often been referred to as “tourists” because they are associated with travel in helicopters and 4×4 vehicles.