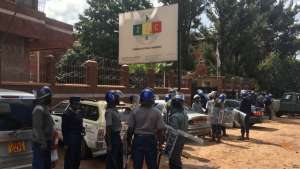 Police sealed Zimbabwe Electoral Commission offices and only allowed a few opposition members to get in March 22, 2017, to present their petition asking ZEC to step down to ensure undisputed polls in 2018. (S. Mhofu/VOA)

Opposition parties in Zimbabwe say they have no confidence in the country’s electoral commission and are calling for an international body to run the 2018 elections.

Opposition parties led by former Prime Minister Morgan Tsvangirai held a rally of about 500 people Wednesday in Harare at which they said the next election is heading for a dispute unless the Zimbabwe Electoral Commission, or ZEC, steps aside.

The rally follows the electoral commission’s request to President Robert Mugabe’s government to buy biometric voter registration equipment in preparation for Zimbabwe’s 2018 elections. The opposition says the move is unconstitutional.

Opposition supporters marched to the commission’s offices to present a petition, singing on their way.

“The political parties have made a fundamental decision and demand that [ZEC be] dismantled,” he said, adding that the elections must instead of overseen by an international body, such as the United Nations, Southern African Development Community or African Union. “ZEC has failed the test of impartiality and independence. ZEC, in the first place, must be independent; the moment it ceases to be independent, it becomes unconstitutional. They cannot argue that they are constitutional and act unconstitutionally. So, it has ceased to be constitutional.”

The electoral body has been meeting with all political parties in Zimbabwe, but ZEC chairwoman Rita Makarau said Tuesday that the effort is not working. 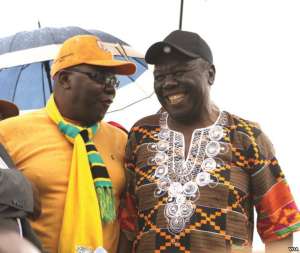 Former Prime Minister Morgan Tsvangirai shares a joke with his former finance minister, Tendai Biti, at a rally of about 500 people in Harare, March 22, 2017. Tsvangirai said the next election is heading for a dispute unless the Zimbabwe Electoral Commission steps aside. (S. Mhofu/VOA)

“We accept fair criticism, balanced and fair criticism; we have always welcomed it,” Makarau said. “Abuse we say ‘No’ by anybody, political parties or any stakeholder. And because we are beginning to feel that our engagements have been misunderstood, we believe it is time for ZEC to go back to the drawing board and see how best we can engage with you. This platform is not working too, according to ZEC. We called you to dialogue, but you do not want to dialogue with us in good faith.”

Makarau was unhappy with a media article quoting the opposition parties as criticizing the commission for asking the central government to take some of its procurement duties.

The opposition parties argue the government was composed of the ruling party, which is a player in Zimbabwe’s election.

On Wednesday, the commission could not be reached for comment, as it only allowed state-owned media into its offices when the opposition petition was presented.