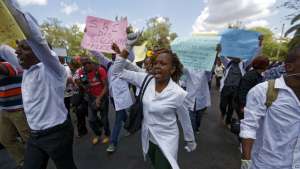 Tanzania has announced a plan to send 500 doctors to Kenya after a doctors’ strike paralyzed health services in the neighboring country for months. Kenyan doctors, however, say the government should not hire any foreign doctors but instead employ the more than 1,000 trained physicians who are unemployed.

Mailu said this was a deal that would benefit both countries.

“We have so many government health centers that need doctors,” said Mailu. “Yes, we have doctors in our country; we recently had a doctors’ strike and one of their reasons for their strike was that there were not enough doctors to attend to patients. The doctors were spending a lot of hours attending to the patients.”

Doctors from public hospitals in Kenya went on strike last December to demand a pay raise and improved working conditions for physicians and patients.

A deal struck by the doctors’ union and the government opened the way to negotiations that ended the 100-day-old strike.

According to Mailu, it is because of the doctors’ demands that the push to recruit foreign physicians was realized.

Dr. Elly Nyaim of the Kenya Medical Practitioners and Dentists Board says the move may not have been clearly thought out.

“As per the World Health Organization recommendation, we still have a shortage even with the ones we produce from our universities, that state actually cuts across the entire East Africa… so Tanzania is actually even worse off than we are in terms of the doctor-patient ratio,” said Nyaim.

The physician’s union says Kenya currently has 1,400 doctors who have not been absorbed into the workforce. 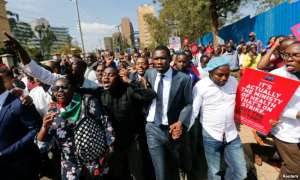 “It would be very unfortunate that you are actually exporting when you do not have enough yourself; it should not be done at the expense of denying qualified Kenyans positions because you are bringing foreigners,” said Nyaim.

“By good luck our friends have said they will pay good salaries and the payment will be in dollars. They will be given accommodation and security,” said Magufuli.

Health Secretary Mailu says the Tanzanian doctors will start working in Kenya in April and will be given two to three-year contracts.

And he says there are plan underway to also hire doctors from Cuba.