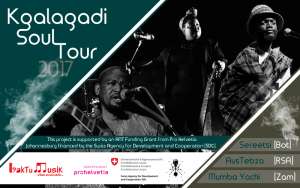 Kgalagadi Soul is a collaboration of three top artists – Mumba Yachi of Zambia, Sereetsi from Botswana and Austebza a South African. The trio has acquired a wealth of experience wowing their fans all over the world on big and small stages. Kgalagadi Soul will present a rich repertoire drawn from the trio’s individual projects using one international band comprising musicians from Congo (Nseka Bienvenu – guitar), South Africa (Bokang Kupa – keyboards), Zimbabwe (Leroy Nyoni – drums) as well as the USA (Terry Lewis – saxophone) that makes the tour a strong collaborative affair.

Kgalagadi Soul will be doing workshops during the tour in cities they will be performing at to share their knowledge with young and aspiring musicians. The one-day workshops will be structured in this way:

Sereetsi whose 83 page four string folk guitar instructional book/CD has been approved by Botswana Education Ministry to be taught in schools, will be leading the workshops. He will be teaching the technique of playing a modern guitar on four strings. A tradition originally used by herdboys on a self-made tin guitar.

Mumba Yachi will be sharing his experiences in the international music business scene.

Austebza will also share her experiences as a performer, a session musician and a bandleader as a woman in the tough music industry.

MUMBA YACHI is a folk musician born in Mokambo, a border town with the DRC Congo. He developed interest in music at a tender age while listening to his mother singing in a church choir and his father playing his various records of African musicians

Mumba Yachi seriously involved with music after spending just one day at the university. He quit university to follow his music call. He has been active on the music scene since 2009 and has released four albums – I am Lenshina (1st May 2015), Mongu Rice (2013), Mokambo (2012) and Inspire Me (2010).

Mumba Yachi has won several awards in the Zambian music scene
including Best Traditional Album for his Mokambo album and Best Live Recording Album for I am Lenshina album. He has become a household name in Zambia and is considered the leading voice in traditional/folk music of his generation. He is also a UN Ambassador for Gender Equality.

SEREETSI has just won four awards out five nominations at the BOMU Awards 2016. He is considered a pioneer on the cultural landscape in Botswana. His 83 page guitar instructional book/CD on the local folk guitar tradition entitled The Solo Four String Guitar of Botswana is a groundbreaking first. He continues to present workshops on the folk guitar tradition in Botswana and internationally. His book has been assessed and approved for use in schools by Botswana’s education ministry.

Only over a year after the release of his debut album, Four String Confessions, the act has already shared stages with established names like Jonathan Butler, Oliver Mtukudzi, Caiphus Semenya, Jaziel Brothers, Letta Mbulu and McCoy Mrubata. Sereetsi is the first Botswana act to embark on a month-long tour of South African (2016).

Sereetsi has also played Chicago, USA, Planeta World Music Festival in Gothenburg, Sweden, the Mahika Mahikeng Jazz festival for two years in succession, Kgalagadi Jazz Festival and the Cultural Calabash Fest in Durban, South Africa. This is in addition to a busy festival and corporate gig schedule in Botswana. Among festivals Sereetsi & the Natives has played in Botswana are the Maun International Arts Festival, The Hamptons International Jazz Festival, Son of the Soil and the President’s Concert.

Born in Krugersdorp and bred between Boons and Mafikeng, AUSTEBZA is a vibrant, energetic, incredible musician. She started her music career after her parents couldn’t afford to pay her university fees, but she has always been involved in music throughout her middle and high school. She then went to join the music department at the Mmabana Cultural Centre in Mafikeng, where she learned how to play the acoustic guitar.

Her debut album, Make a Difference has been well received. She is constantly performing with her band around South Africa.

The Kgalagadi Soul Tour 2017 is supported by an ANT Funding Grant from Pro Helvetia Johannesburg financed by the Swiss Agency for Development and Cooperation (SDC).

More shows to be confirmed.