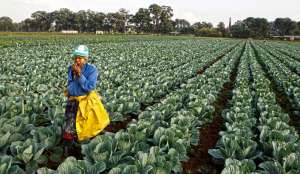 South Africa has proposed a new law banning foreigners directly buying agricultural land in the country as the government seeks to boost ownership for the black majority.

Non-residents will be allowed to take long leases on the properties or the land should be majority owned by a black South African, according to the Regulation of Agricultural Land Holdings Bill, published in the Government Gazette on Friday. The proposal is open for public comment until April 17.

The ruling African National Congress is seeking to accelerate the transfer of land to the black majority to help reduce inequality and reverse the legacy of white-minority rule. President Jacob Zuma has also vowed to step up wealth distribution, promising “radical economic transformation” in his final year as leader of the party. While Zuma has suggested changing the constitution to allow the state to expropriate land without paying for it, an ANC policy document calls for fair compensation.

Foreigners considering selling land must give the Minister of Rural Development and Land Reform first option on the property, according to the bill. The government would have 90 days to take up the offer, after which it can be sold to a citizen.

The minister will also impose limits on the size of farms people can own, depending on the region and following consultation, according to the document.

The “increasingly populist rhetoric” from Zuma about land doesn’t signal a sharp shift in policy, but it may harm investor sentiment, BMI Research, a unit of Fitch Ratings Ltd., said in an emailed note.

“While President Jacob Zuma has begun to adopt an increasingly populist tone in his discussions of land reform, the policy measures put forward by the ruling African National Congress are likely to remain more moderate, it said. “That said, the more left-leaning policy statements will offer continued headwinds to investor sentiment, further undermining growth.”