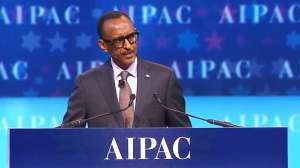 AIPAC’s annual policy conference takes place this year from March 26 through March 28 at the Washington Convention Center.  In 2016, 20,000 people attended and every presidential candidate (except for Vermont Senator Bernie Sanders) spoke at the event, as did then-Vice President Joe Biden.  Each year it attracts top U.S. government officials, key congressional committee chairmen and powerful senators, military officers, journalists, and wealthy philanthropists who have an interest in Israel and U.S.-Israel relations.   President Donald Trump’s son-in-law and advisor, Jared Kushner, is a long-time participant in AIPAC activities and he will be there as his father-in-law’s eyes and ears.

During the past five years, AIPAC has spent more than US$14 million on lobbying the U.S. federal government.  In what looks like a tactic in a “charm offensive,” Kagame will be looking among the AIPAC attendees to find lobbying services that have an inside track with the new Trump administration.  According to available public records from the U.S. Department of Justice, since 2014, Rwanda has already been spending a minimum of US$45,000 per month – more than US$540,000 per year – on lobbying and public affairs services in the United States.  Sources in Washington and Kigali suggest that Kagame is prepared to spend double that to cozy up to the new Trump administration.

Kagame’s invitation to AIPAC stemmed from a sense of affinity between the Israeli and Rwandan peoples, who have both suffered from genocide.  There was another motivation in Kagame’s visit to Washington, however:  to shore up his relations with the new Trump administration, which has close ties to AIPAC through Kushner (the Orthodox Jewish husband of Trump’s daughter, Ivanka, another close West Wing adviser), and to Israel itself, through Prime Minister Benjamin Netanyahu, who did not hide his support for Trump over Clinton during the raucous 2016 presidential campaign.

With the departure of the Obama administration, Kagame has lost his key patrons in the U.S. government, including former National Security Advisor Susan Rice (who, in the private sector, represented the Rwandan government as a consultant in the early 2000s) and former Ambassador to the United Nations Samantha Power, who made her reputation as an Africa analyst by writing about the Rwandan genocide of the 1990s.  Her book, A Problem from Hell:  America and the Age of Genocide, brought Power to the attention of Barack Obama and eventually to her ambassadorship in Turtle Bay.

Recognizing that Africa is a low priority for the Trump administration’s “America first” foreign policy, Kagame will use his short trip to Washington in meetings with opinion influencers, such as think-tank experts and Africa policy makers from previous administrations.  For instance, Kagame is scheduled to speak in a closed-door meeting at the prestigious Atlantic Council on Monday, March 27.  The event is hosted by Dr. J. Peter Pham, director of the Africa program at the council, who is widely touted to be the next Assistant Secretary of State for African Affairs, succeeding Linda Thomas-Greenfield, who has left the State Department for a pre-retirement fellowship at Georgetown University.  (Thomas-Greenfield is likely to be among the 30 or so experts who attend Kagame’s presentation at the Atlantic Council, along with other former assistant secretaries like Herman Cohen and Constance Berry Newman.)

In Kagame’s speech to AIPAC, he stated that “Until all ideologies which justify killing as a patriotic duty are defeated our world is not truly safe. Not for us, not for anyone.”  Yet his appearance before the 20,000 “friends of Israel” at the Washington Convention Center came on the heels of reports from the Democratic Republic of Congo that Rwandan militias under the banner of the FARDC had beheaded more than three dozen Congolese police officers.   The Rwandan-backed, Tutsi-staffed FARDC has also been implicated in the kidnaping of American aid worker Michael Sharp and the assassination of Swedish UN expert Zaida Catalan.

These events stand in odd juxtaposition to Kagame’s urging in his AIPAC speech that, “together with friends like the United States, we must call for renewed global solidarity against the reckless efforts to deny genocide and to trivialize the victims.” 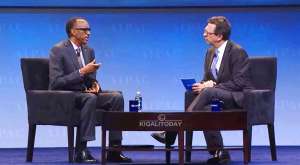 According to one African Analyst, Kagame’s presence in Washington and meeting with prominent advisors to the White House suggests he wants to claim the inside track against other leaders in the Great Lakes region, so that Uganda’s President Yoweri Museveni and Burundi’s President Pierre Nkurunziza, for instance, will have to play a game of “catch-up” to obtain the attention of the Trump administration and retain the political and logistical support those countries have received from the United States infighting regional terrorism.  (Both Uganda and Burundi have deployed hundreds of troops to Somalia as participants in AMISOM, the AU Mission in Somalia.)

Even in the absence of his old friends Susan Rice and Samantha Power, Kagame has enough political savvy to sniff out new allies in the unconventional Trump administration, whether it is in the still-to-be-staffed State Department or the White House National Security Council – or even in the Pentagon, which more than two decades ago took Kagame under its wing to train him and his comrades-in-arms to end the genocide and take over the Rwandan government.

Praised by many who give him credit for the changing fortunes of Rwanda and scorned by critics who see growing dictatorial tendencies, Kagame has emerged as a champion of African solutions to African problems. His latest leadership role is a commission under his watch to come up with reforms to boost the economic viability of the African Union. One of the few African leaders to have spoken to President Trump so far, Mr Kagame is also the first leader to be hosted by Washington in a high profile event since the new U.S Administration took office.