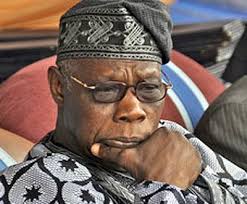 He stated this in Abeokuta at a symposium titled ‘Purpose and Utilitarian Values of Presidential Libraries’, held as part of the programme for his 80th birthday celebration.

Mr. Obasanjo, who was the former Chairman of the Board of Trustees of the troubled main opposition party, was replying to comments by Mr. Ali about their past relationship in government.

He quickly added that Nigeria would not die lik‎e the PDP.

Mr. Obasanjo, who was elected president twice on the platform of the PDP, stressed that the party is dead, sunk and gone.

He recalled that he asked Mr. Ali to lead the party because of his integrity, saying PDP was controlling 30 out of the 36 states.
‎
He said Mr. Ali as the national chairman ensured the stability and effectiveness of PDP, and lamented that the party is now down and out following an intractable internal crisis.

“Ahmadu Ali is truthful and that was why I brought him to head the PDP and all went well. When Ahmadu Ali was the national chairman. We were controlling 30 out of the 36 states. When Ahmadu and I left, the fortune of the PDP began to sink”, he said.

“Whether you believe it or not, today PDP is sunk and gone. May the fortune of Nigeria never sink like that of the PDP” he said, with the audience responding in a thunderous “Amen.”

Mr. Obasanjo while also responding to encomiums poured on him by dignitaries at the event, said the Olusegun Obasanjo Presidential Library was established to correct one of the mistakes he made when he first led Nigeria as a military Head of State.

The mistake, he said, was not collecting and archiving materials connected to his time during the civil war.

“Somebody among the speakers said God has always given me the opportunity to correct my wrongs. I will say God has done that for me not in all cases but in most cases and this Presidential Library is actually an act of God which he has given to me to correct one of my mistakes of the past and I have said this very often.

“But we did collect something. When I was also the military Head of State, I didn’t pay much attention to collect materials, where I should have paid attention to. So, by 1988, it occurred to me that these were mistakes, I looked at some of the materials we got from the war fronts, they were in very bad state of neglect so what I did was to try and micro-film what we could micro-film.

“I also learnt a lesson; when you are in a position to keep materials and preserve them for prosterity, you should do so and I never knew there will be another opportunity. So, God created another opportunity for me to correct the mistakes of the past.

“God is the God and for some of us He is not God of second chance but God of many chances and I will be eternally grateful to God for the opportunity he has given me.

“Take the Presidential Library for example, if not for the members of Board of Trustees, I would have fallen by the roadside and that would have been another mistake, because it got to a stage that things were rough, things were rough and we were just putting heads together. It is God of many chances.”

He urged the youth who attended the programme not to be mindful of their current positions, whether poor or weak, assuring that if he (given his poor background) could make it this far, they can also make it.

He advised them to share whatever ideas they have with others, for the growth and development of Nigeria.

The former President said having passed the kiln of life, including marking time in prison without being killed by his jailers, he has nothing more to fear, save God.‎

In his remarks, former U.S. Ambassador to the United Nations,UN, Andrew Young, said that without Obasanjo, Africa might still be in a desperate position.

“It is time for Nigeria to realise and make amends where it is lagging behind”, Mr. Young said.

“There is no human being in Africa that has experienced what Obasanjo has gone through in the last 50 years. One thing about him is that he is the same way, same person, whether in New York, UN, World Bank, White House or China. He does not change. He does not give a damn who he makes mad,” he said.

He said Mr. Obasanjo should be celebrated, adding that “the Presidential Library will help others to understand his work.”

Similarly, Tracy Roosevelt, grand daughter of a former U.S. President, Franklin D Roosevelt, explained that a Presidential Library is a place, meant to bring together the memories of the past and to also bring men and women together for higher goals.

Ms. Roosevelt said Mr. Obasanjo gave the gift of the library to his people, to share the memories of his past with his people.

“There are 14 presidential libraries in the the United States of America, but the first Presidential Library in Africa was created by Obasanjo in Abeokuta,” she said.