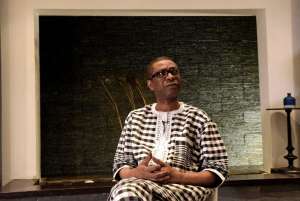 Dakar (AFP) – Youssou Ndour, Senegal’s most famous musician, is throwing his weight behind malaria eradication in his homeland to combat an illness that has for too long held back Africa’s economic development.

Malaria killed more than 400,000 people last year, according to the World Health Organization (WHO) — the vast majority of them children living in sub-Saharan Africa.

Ndour has performed and toured since the 1970s, blending Senegalese music with soul, hip-hop and jazz to international acclaim, but has also become known for his work as a longtime campaigner for malaria prevention.

Senegal is currently in the first stage of the fight against malaria, which the WHO refers to as the “control” phase. It aims to move to the next level — so-called “pre-elimination” — by 2020.

“It’s first of all a serious public health problem. But we also see the economic impact around it and the weaknesses we have at the level of development in Africa because of malaria,” Ndour told AFP in an interview in Senegal’s capital Dakar.

A new $32 million initiative is aiming to finally stamp out malaria in the west African nation, to which Ndour has lent his support.

More than 2.5 million people will receive mosquito nets impregnated with insecticide, 1.6 million rapid diagnosis tests will be distributed and 70,000 doses of anti-malarial drugs will be delivered as part of the project, along with advice and training for healthcare workers.

The Lives and Livelihoods Fund, which targets health projects in Muslim-majority nations and is funded by the Bill and Melinda Gates Foundation and several Gulf states, is backing the project with the Senegalese government.

Ndour speaks with anger about the children’s lives lost needlessly to the disease over the years.

He believes the Senegalese have frequently minimised malaria’s deadly impact in the past, allowing the parasite carried by mosquitos to wreak damage that is far more dangerous to children.

“Here there are a lot of people who will tell you ‘oh I just have a touch of flu’ while in fact they have malaria,” Ndour said, sporting a white and black checked traditional Senegalese robe.

The risks are not only to health, he emphasised. “When children don’t go to school, there are no jobs, you can’t work. So poverty is always hovering in the background.”

He noted the strong link between malaria and poverty — the disease has a $12 billion impact on the global economy every year, hitting sub-Saharan Africa’s fragile economies by far the hardest.

Senegal has made huge gains in reducing malaria rates in recent years, which the project aims to consolidate to put the country on the path to complete eradication.

Ndour remains a massive star at home, where his music blares from seemingly every taxi and corner shop, while he is best known in the West for “Seven Seconds”, his 1994 duet with Neneh Cherry.

Using his fame as a weapon, he has participated in prevention campaigns aimed at getting families to sleep under mosquito nets, while promoting his cause abroad with giant concerts with fellow African and international musicians.

Ndour has toured the world for the last five decades, but old images he was shown in the US stick out when he tries to picture an Africa without malaria.

“They showed me these old photos in Washington, and at the time there were mosquitos. How come (the disease) is gone?” he asked himself, learning that the government and citizens had mobilised together to beat malaria after World War II.

“With the example of Washington, tomorrow we should be able to say: Senegal, Burkina Faso, Mali, that the problem in these places has been fixed to allow these African nations to take off,” the singer added.

Efforts must be far more concerted now that the end is in sight, he believes.

“We have to pick up the pace to actually eradicate malaria,” he emphasised. “I hope to see it happen in my lifetime.”