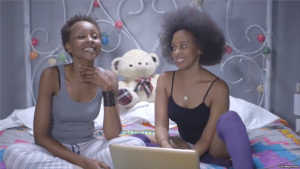 A screen shot taken from the video podcast of ‘The Spread’ in Nairobi, Kenya.

Nini Wacera and Karen Lucas are known as the “sex queens” of Nairobi. In a rather conservative country, they co-host a popular podcast called “The Spread.” The project is aimed at opening dialogue about sexuality, providing information on sexuality to people of all ages, focusing specifically on the youth.

The platform kicked off in 2015 after Lucas and co-presenter Wacera noted that no one was having conversations with the youth about sex. There was a platform on the continent, and in Kenya specifically, for a sexuality-based talk show.

“It’s the way we were raised and it has a lot to do with religion and sort of like the religious beliefs that are pushed upon us and being told by our elders that certain things are wrong but I think it’s changing, there is a new wave and new generation of people who are a lot more open. If we can sort of spearhead that in Kenya then we are very happy to do that. It’s about unlearning all of the things we have been told are bad and taboo,” said Lucas.

A wide range of topics are discussed on the show, from sexual health, body image, pornography and the dangers associated with sex and sexual abuse to HIV and sexually transmitted diseases.

“There are many things that can be avoided, teenage pregnancies and the rise of HIV amongst our children, sexual abuse. If we are having conversations with our children about sex and sexuality all of this things can be avoided or reduced in our country,” said Lucas.

Twenty-nine year old Cathy Sonia is an ardent listener. Growing up, she struggled with her sexual identity; she had no one to talk to about it.

“A lot of us are raised to believe that sex is more of a private issue. It never comes across to our parents to talk to us about sex, that never happens and so as kids we grow up believing that that’s just a taboo,” said Sonia.

She said the show has helped her understand her sexuality.

The Kenya Film and Classification Board is the government agency mandated to regulate the creation, broadcasting and distribution of films in the country. The Kenya Information and Communications Act empowers this agency to promote national values and morality. Its CEO, Ezekiel Mutual, says podcast produced in Kenya falls under the boards mandate.

He said he supports The Spread, but insists that ‘morality’ should be maintained. As long as the podcast does not promote homosexuality, he is fine with it.

“There are levels that could create an offense, but the discussions about sexuality in itself are very healthy, I think we need to provide this platforms for guys to talk about it,” said Mutual.

“We cannot continue to bury our heads in the sand and assume that the subject of Homosexuality is not happening in Kenya. It is happening, therefore I encourage the conversation. My problem would be, people who are in it should not use it to create misleading information that this is the norm or this is what should be in Kenya. If they are discussing the challenges, if they want to find help, if they want to find confidence in discussing and finding solutions among them, I have no problem.”

The Spread continues to channel sex-positive messages. The presenters said they will continue to support and promote young people’s healthy sexual development through their broadcasts.