Ethiopian regional officials are demanding that foreign cement producers including Dangote Cement Plc hand control of some parts of their businesses to groups of unemployed youths.

The Nigerian company, controlled by Africa’s richest man, Aliko Dangote, and others such as Saudi billionaire Mohammed al-Amoudi’s Derba MIDROC Cement Plc, should allow the youth to run their pumice mines, according to a draft contract drawn up by Oromia state’s East Shewa Zone administration this month. Pumice is an additive used in cement manufacturing and its extraction is overseen by local bureaucrats, rather than Ethiopia’s central government.

“The youth have to get the advantage from the resource, and side-by-side the companies must get advantage from this resource,” Yohan Tesso, head of East Shewa’s urban employment creation and food security office, said by phone. “It’s a win-win.” 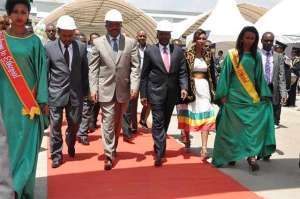 Prime Minister Hailemariam Desalegn’s administration is trying to reduce youth unemployment five months after it declared a state of emergency to deal with violent protests by Oromo communities over alleged land dispossession, political marginalization and repression by the state. Dangote Cement was among several businesses attacked during the unrest, which caused foreign investment to slump.

Oromia has 1.2 million unemployed youth, according to the Addis Ababa-based Walta Information Center news service, which cited a local youth affairs office. The state is targeting the creation of 950,000 new jobs for young people, it said.