Cameroon aspires to be a tech hub and “multiply by 50” jobs in ICTs. But high costs, poor infrastructure and the internet blackout in Silicon Mountain undermine this vision. 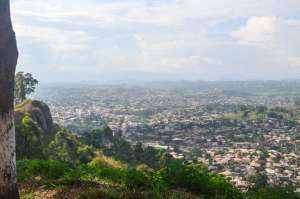 Bamenda northwest Cameroon is amongst the major towns without internet for nearly two months. Credit: jbdodane.

For nearly two months now, Cameroon’s two English-speaking regions have been living under an internet blackout. Communication by email and social media has ground to a halt. Banks and ATMs have stopped services. And companies that rely on the internet to do business have suffered tremendously.

The services were cut off by the government on 17 January in response to mass protests against perceived marginalisation and the imposition of the French language in local schools and courts. The move was intended to stifle communication amongst activists – and was accompanied by mass arrests – especially in the major cities of Bamenda, Buea and Kumba.

The shutdown has also had devastating economic effects. A month into the shutdown, over two dozen organisations including the advocacy group Access Now wrote an open letter to complicit telecoms companies in which they estimated that the policy had already cost over $1.39 million. And this fast-rising figure, they explained, does not even take into account “the disruption of supply chains and of the significant amount of remittances that Cameroonians living abroad send to these regions”.

“By blocking access to information and services, the disruption thwarts the exercise of human rights, including the freedoms of expression and association, and slows economic development, seriously harming the innovative businesses dependent on your services,” read the letter.

Amongst the companies most affected are those located in the town of Buea, home to the now famous “Silicon Mountain”. This small town has been described as “Africa’s next tech hub” or the continent’s “new home of innovation”. Buea has punched well above its weight as an incubator for innovative African tech start-ups for the past few years, but with no access to the internet, the usual buzz of activity has fallen silent.

“We can’t work nor do business,” says Achia Rolence Aka, a telecoms engineer at the tech company Skylabase. Without the internet, he says, the websites they build cannot be updated, countless hours of work have been wasted, and they cannot communicate with their clients.

“Worst of it is that one of our products is selling internet to the community,” he adds. “The service has been grounded and we are feeling the huge financial loss.”

Otto Akama, a community developer for the tech hub ActiviSpaces and co-founder of Makonjo Media, echoes this account.

“We could travel to Douala and Yaoundé [cities in French-speaking regions where there is internet] to get our systems up and running, but we cannot force our users to move,” he says.

Akama says he now regrets paying rents, salaries, and bills for services he is unable to use, and laments the vast amount of time, energy, and resources that have been lost as a result of the two-month shutdown.

“It is the most difficult period in my life”, he says.

Aside from the violations of freedoms and hardships imposed on Anglophone citizens, analysts suggest that the internet shutdown could also undermine the government’s own long-term vision.

Under President Paul Biya, who has been in power since 1982, Cameroon has made the development of information and communications technology a strategic priority in its ambitions to become an emerging economy by 2035.

It has vowed to invest heavily in digital infrastructure and “multiply by 50 the number of direct and indirect employment positions” in ICT between 2010 and 2020. Meanwhile last year, Biya made headlines after he promised one laptop for each some 500,000 university students, hoping to drive the country’s digital economy.

However, in contrast to the government’s rhetoric, that generous promise, amongst others, remains unfulfilled. Importing digital equipment is still a highly complicated and costly process. And the internet blackout in the two English-speaking regions has dealt a huge blow to the finances, advancement and morale of the once flourishing tech businesses in Silicon Mountain.

Moreover, according to global reports, Cameroon is floundering when it comes to its preparedness to capitalise on digital innovation. In the World Economic Forum’s 2016 Global Information Technology Report , Cameroon ranked 124th out of 139 countries in its Network Readiness Index, placing it below the likes of The Gambia, Zimbabwe and Mozambique. The country performed particularly poorly on measures such as infrastructure, the availability of digital content, and affordability.

Similar shortcomings contributed to Cameroon’s low ranking in the UN’s 2016 E-Government Survey, which examined how well countries are “embracing innovation and utilizing ICTs to deliver services and engage people in decision-making processes”. In the extensive report, Cameroon was in the bottom category on most measures and ranked 155 out of 193 countries.

These findings would come as no surprise to most Cameroonians. Electricity supply remains epileptic in most towns and absent in others, especially in rural areas. Internet data bundles still sell at exorbitant prices in a country where many live below the poverty line. And mobile network service providers say they are operating the 4G LTE network in major cities, but bandwidth remains questionable.

Despite the government’s declared intentions to make the country a digital gateway and technological hub for the continent, its vision looks extremely distant. And the devastating political, economic and psychological impact of the internet shutdown in the Northwest and Southwest, regions that would be central to the government’s digital ambitions, looks to have put this aspiration even further out of reach.

As civil society activist Julius Mbeng asks: “How do you expect to achieve the digital economy plan when you shut down the internet in a region where the country’s best techies are found?”

*African Arguments.Amindeh Blaise Atabong is a freelance journalist based in Cameroon. He has covered conflict, humanitarian issues and human rights abuses for a number of international outlets. Follow him on twitter at @AmindehBlaise.