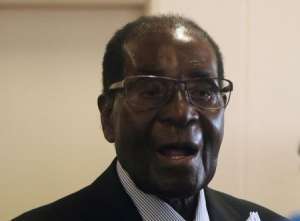 HARARE (Reuters) – Zimbabwe’s people and the ruling ZANU-PF party see no viable alternative candidate to President Robert Mugabe for general elections in 2018, state media quoted him as saying on Sunday.

“The people, you know, would want to judge everyone else on the basis of President Mugabe as the criteria,” Mugabe, who is Africa’s oldest leader, said.

Mugabe has been in power in the southern African country since 1980 and in December his party confirmed him as its candidate for the next presidential election expected in mid-2018, when he will be 94.

“Of course if I feel that I can’t do it any more, I will say so to my party so that they relieve me. But for now I think I can’t say so,” Mugabe said.

The state-run Sunday Mail newspaper, which published the comments, said he added Trump might review the sanctions imposed on Mugabe and members of his inner circle by Washington in 2003 over alleged rights violations. The sanctions were extended by the Obama administration.

No reason was given as to why Mugabe felt Trump might re-examine sanctions and his direct comments on the matter were not published.

But Mugabe said he had not wanted Hillary Clinton to win the 2016 White House election because “I knew she could slap sanctions on us as a legacy.”

“We are just now under sanctions imposed not by Donald Trump, but by Obama. What arrogance is that?,” Mugabe was quoted as saying.

The comments were published in advance of the full broadcast of the interview on state-run TV on Monday and Tuesday.

Critics accuse Mugabe of wrecking one of Africa’s most promising economies through policies such as violent seizures of white-owned commercial farms and money printing. He and his party say the economy has been undermined by western powers.