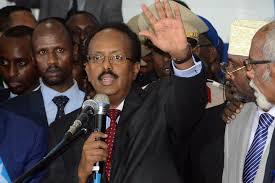 Somalia’s new leader was inaugurated Wednesday while promising to restore dignity to the troubled Horn of Africa nation but warning it will take another two decades to “fix” the country.

“Multiple challenges are ahead of our government. Therefore, I am telling people that because of the limited resources we have, our achievements will be limited,” said Mohamed, also known as Farmajo. “For the past 26 years there have conflicts and droughts, so it will take another 20 years to fix this country.”

He said Somalia’s main obstacles are insecurity and humanitarian crises, including a drought that the U.N. has said affects millions of people. The immediate priority is to “avert famine,” the U.N.’s special representative for Somalia, Michael Keating, told the audience that included several regional heads of state.

The new president said his government will focus on “reconciliation, justice and law and the restoration of the confidence of people in the government.” He already has promised to tackle graft in a country recently ranked by Transparency International as the world’s most corrupt.

Mohamed also promised payments, equipment and training for the military, which over the next few years will take on more of the responsibility of countering homegrown extremist group al-Shabab as an African Union peacekeeping mission of more than 20,000 plans to withdraw by the end of 2020.

Somalia’s new leader has already vowed to make security a priority in a country where al-Shabab still carries out deadly attacks in the capital, Mogadishu, and elsewhere. On Sunday, a car bomb in the capital killed at least 34.

The new president said his government would welcome people who choose to leave al-Shabab, adding that “you few thousands cannot stand in the way of 12 million people.”

The peaceful transfer of power to Mohamed has been widely praised, and an International Crisis Group commentary on Wednesday said the new president’s wide appeal “the strongest platform for any Somali president, is a rare demonstration of unity in the ethnically homogenous but clan-fractured country.”

But if the new leader can’t manage the “inordinately high expectations … dissatisfaction could trigger a serious public backlash,” the commentary said.