Uncertainty over health of President Buhari 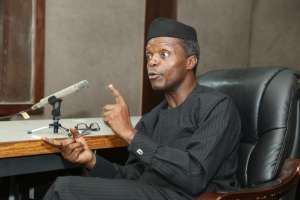 LAGOS, Feb 20 (Reuters) – Nigeria’s deputy leader is making wide use of powers granted by President Muhammadu Buhari, who is on extended sick leave abroad, as the country seeks to avoid a debilitating power vacuum while it confronts its first recession in 25 years.

The West African oil-producing nation was gripped by instability in 2010 when then President Umaru Yar’Adua spent three months in a Saudi hospital while his aides shrouded his illness in secrecy. His deputy Goodluck Jonathan only took over after he died in the midst of a constitutional crisis.

The Nigerian stock exchange, already hit by recession, has fallen to a nine-month low on the uncertainty over Buhari. But officials are keen to avoid the mistakes of the past and drive home the message that government work will continue whatever happens.

Before Buhari left home almost a month ago to be treated in Britain for an undisclosed illness, the 74-year-old appointed his deputy, Yemi Osinbajo, as Acting President.

“The nation came to a political standstill because of the failure of Yar’Adua to submit a letter transferring power to Vice President Jonathan,” a government official said, asking not to be named.

“In this present scenario this is not the case. No vacuum was left because President Buhari sent a letter to the National Assembly,” he said.

Osinbajo has thrown himself into his work, holding cabinet meetings and travelling to the Niger Delta in an attempt to end militant attacks on oil facilities which cost up to $100 billion in lost revenues in 2016.

Investors welcome the fact that the government will not postpone a long-awaited reform plan intended to stimulate an economy hit by low oil prices.

“Obviously the fact that the president is away creates uncertainty, but we believe Vice President Osinbajo is capable of running things in the meantime,” said Cobus de Hart, senior economist at South Africa’s NKC African Economics.

Officials refuse to disclose what is ailing Buhari, saying only that he has been having tests and is not in a serious condition.

Diplomats say Buhari has made several visits to Britain to see his doctor, routing official trips even to destinations as far afield as Asia via London so as not to have to declare medical leave all the time.

In contrast to Yar’Adua, whom officials cut off from the world on his sickbed in Saudi Arabia, the presidency publishes almost daily pictures of Buhari receiving visitors in his London drawing room. He took a phone call from U.S. President Donald Trump on Monday, both administrations say. 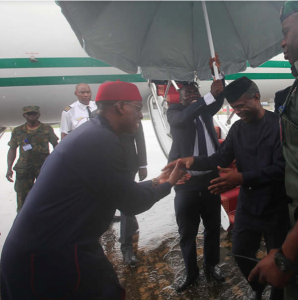 Vice President of Nigeria, Professor Yemi Osinbajo been received by the state governor, Ifeanyi Okowa on a visit to Delta state

In an indication that his British stay might drag on, the speakers of both of Nigeria’s chambers of parliament flew to meet Buhari at Abuja House, a Nigerian government residence in west London, according to an official picture.

“I thanked them for visiting. I am also grateful to Nigerians, Christians and Muslims alike, for their prayers and kind wishes for my health,” a smiling but thinner-looking Buhari said, according to an official tweet late on Wednesday.

Some Nigerians have been getting worried.

The arrangement with Osinbajo ensures the day-to-day running of government business. But the long-term risk is that the Muslim north, where Buhari hails from, might not accept Osinbajo as a permanent solution if the president became incapacitated at some point.

Osinbajo is a Christian lawyer from the commercial capital Lagos in the south. He has shown conspicuous loyalty to Buhari and given no sign that he plans to run for president himself.

Traditionally in Nigeria, the leadership rotates between north and south to ensure a balance in a country evenly split between Muslims and Christians. The capital, Abuja, is placed right in the centre as symbol of unity.

Jonathan, a Christian from the south, upset many northerners by refusing to give way to a northern candidate. Northerners felt there should have been another northern presidential term after Yar’Adua’s death. Hundreds were killed in riots after Jonathan’s election in 2011.

“The politics of rotation is always delicate in Nigeria,” said Anthony Goldman of Nigeria-focused PM Consulting. “But Nigeria has quite a good record of managing the worst crises in leadership.”

He took advantage of Buhari’s absence abroad last year to float the idea of a more flexible foreign exchange policy, which paved the way for an overdue devaluation of the naira.

Osinbajo has been always been in charge of the economy but Buhari has left him little space, subscribing to the view that a strong country needs a strong currency.

Keeping the naira artificially high has deterred investors, who assume Nigeria will have to devalue again. This week, the naira hit a new low at 516 to the dollar on the black market, where importing firms need to go for their dollars, in contrast to the official rate of around 305.

“Some of his (Osinbajo’s) statements have conveyed a more liberal approach to economic policy, which is a good sign,” said de Hart.

Over the past few weeks, Osinbajo, 59, has been pursuing the economic recovery plan required if Nigeria is to obtain a World Bank loan to fund its record deficit.

“We are doing some fine-tuning and during this period we also do some final consultation before the president launches the plan,” budget minister Udoma Udo Udoma said after a cabinet meeting chaired by Osinbajo on Wednesday.

Osinbajo this week also proposed legalizing illicit oil refineries in the Delta, where an army campaign against them has been fuelling tensions. Makeshift facilities refining stolen crude oil are often the only places young men can find work in the impoverished region.

“Within that week he (Buhari) left, there have been a lot of meetings, a lot of committees were being formed by the vice president,” said Oloyede Kamoru, a Lagos businessman. “So why are we complaining that we want to see the man (Buhari)? His absence is not having any impact on the economic issue.”