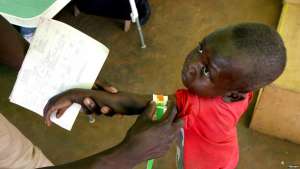 FILE – A Congolese boy has his arm measured for malnutrition in a clinic run by medical charity Medecins Sans Frontieres in the remote town of Dubie in Congo’s southeastern Katanga province, March 18, 2006.

The United Nations and Congolese authorities launched an appeal Friday in Congo’s capital, Kinshasa, for $748 million to provide lifesaving assistance for 6.7 million people across the conflict-wracked country.

The appeal this year is 8 percent higher than last, and reflects a new three-year strategy.

In Geneva, where the Office for the Coordination of Humanitarian Affairs, or OCHA, is based, spokesman Jens Laerke said the new action plan involves a more integrated approach in dealing with “two decades of recurring humanitarian crises.” Conflict and widespread atrocities have left millions of people unable to cope with the daily necessities of life in Congo.

Laerke noted that the families, communities, men, women and children in Congo who are to be helped by the appeal are facing acute vulnerabilities.

“A lot of that is caused by no or very little access to basic goods and services,” he said. “There is also a protection crisis related to the conflict and the violence, particularly in the eastern part of the DRC.”

While more than 60 percent of the humanitarian needs have been in eastern Congo, Laerke said western and central provinces suffered from generalized poverty that required humanitarian attention.

He said among those the U.N. hoped to help this year were 2.1 million internally displaced people.

“There are half a million children less than 5 years of age suffering from acute malnutrition,” he said, and hundreds of thousands of people threatened by diseases, epidemics and food shortages, especially in areas of conflict.

The OCHA spokesman also said part of the appeal will go to assisting a growing number of refugees fleeing intensified fighting in South Sudan. 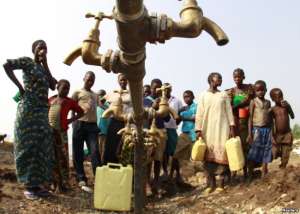 The Humanitarian Response Plan was for a three-year period, but the $748 million requested was for humanitarian operations for this year alone.

Paluku Kisaka Yereyere, the DRC’s minister of social affairs, solidarity and humanitarian action, noted that having a strategy that encompassed the period between 2017 and 2019 was important in that it helped “the community to set priorities for the next three years.”

U.N. officials agreed that this would allow time for agencies to map out developmental projects so that they could be implemented more effectively in the years ahead.

Nevertheless, given the worsening levels of conflict and violence over the last year, the officials noted that basic, emergency needs were “likely to increase even further in the coming months.”

In response to a question from VOA, OCHA spokesman Laerke said he did not think that there was “a direct causal link between political developments, mainly in Kinshasa, and displacement that happens across the country, DRC. That is impossible.”

DRC President Joseph Kabila has insisted that he remains in power until an election for a new leader is held; however, the president and opposition parties so far have not been able to agree on a date for the election, to take place sometime this year or in 2018.

In the meantime, the U.N. reports that last year, insecurity forced an average of 2,000 people to become displaced every day, prompting Rein Paulsen, the OCHA representative in the DRC, to observe that “millions of people are suffering a humanitarian crisis born out of armed conflicts and other threats.”

He said that this was deeply affecting their daily lives. 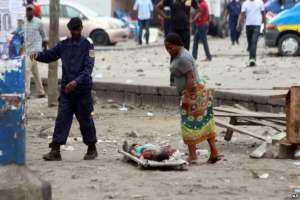 A woman, right, looks down at a man that was killed during elections protest as an Congo policeman, left, passes in Kinshasa, Congo, Sept. 19, 2016. At least four people are killed as Congo’s capital erupts in fiery protests over the delayed presidential election, as fears grow that one of the world’s poorest countries will again spin into chaos. (AP Photo/John Bompengo)

“It is vital that the world does not forget the urgent and massive humanitarian needs in the DRC,” he said, adding that it was critical “to mobilize the $748 million needed to respond to the growing vital needs.”