I helped design the first African election observation mission in 1980. The world’s transformed since then, but they’re still using the same old model.

In 1979, I was a member of the Commonwealth Secretariat, an organisation that played a major role in the negotiations that led to Zimbabwe’s independence. One of the preconditions for majority rule agreed in the Lancaster House talks was that elections would be held and that they would be independently observed.

In January 1980, the month before these elections, the Commonwealth Secretariat sent a small party to what was then still Southern Rhodesia to establish a headquarters and work out whether and how this observation could be conducted.

We had no detailed instructions. Electoral observation had not been attempted before, certainly not on this scale. So two of us – Peter Snelson and I – conducted a rapid reconnaissance of the country in a single week. Our report formed the only field input for the plan then devised by Moni Malhoutra.

Both in this first week and in those that followed, we had no advanced idea of what we were doing. But our improvisation in hazardous conditions assumed a pattern and, ultimately, partly through luck, we were able to do an imperfect but respectable job given the circumstances and conditions.

Since then, I have witnessed several more African elections and seen how independent observers’ processes have become bureaucratically more robust (or fussy). However, it amazes me that despite all that’s changed in terms of how elections are conducted and fought, and how technologies have progressed, today’s observers are still essentially using the same semi-improvised, low-tech methods and models we devised in a hurry 37 years ago.

Of course, some things have changed since 1980, though not always with positive results.

One of the earliest decisions of the Commonwealth team in Zimbabwe was that observation had to be decentralised. Officials were rotated around different zones on a weekly basis, while a small secretariat remained in place in each area to prepare for the polls and liaise with the various political parties and security forces.

By and large, modern electoral observation still seeks to spread officials across the country being observed. But today, it does so without the rotation of observers, without the aim of being present for more than a month before Election Day, and without on-site secretariats. Moreover, it tends to avoid war zones or volatile areas.

In the 2010 South Sudan elections, for instance, UN peacekeeping bases were meant to provide accommodation for observers, but the Chinese and Kenyan camps did not comply. Although the Ukrainian and Canadian ones did, many regions were under curfew, so officials were discouraged from travelling to certain areas for fear of being stranded. It was often these regions that were most in need of scrutiny.

Another aspect of observation that has developed – and arguably progressed – since 1980 has been the use of bureaucratic check lists. These are indicators of good performance that can be easily tabulated to give ‘scores’ for different aspects of electoral conduct.

For example, there are now generally tick boxes for whether party agents are the right distance from the polling desks; whether special assistance was available for the disabled and elderly; whether all documents, ballots and ballot boxes were in place; whether voters’ rolls were accessible, and so on. The 1980 Zimbabwe observation sought to check similar indicators of good polling practice but without formal checklists.

However, one result of these two shifts – the rise of the tick-box, combined with a diluted version of decentralised observation – is that scrutiny of elections has become heavily focused around the day of voting itself.

Observers are dispersed to their stations just a few days prior to the vote, and governments and electoral commissions concentrate their energies on mounting an Election Day that conforms to international norms, precisely for the benefit of international officials.

This means that the preceding weeks of campaigning around the country get much less scrutiny. Yet it is in this period that systemic violence, widespread bribery and unjust infringements on freedoms of movement and expression can ensure that an election is far from “free and fair”, even if voting day itself is exemplary.

Despite some changes in practices though, the basic principles and models of election observation have changed relatively little in 37 years. However, in that same period, the nature of elections and of attempts to manipulate their results have changed quite dramatically. The age of dictators stuffing ballots and winning with an implausible 90% vote share is over. Today, when elections are stolen, much of the work is done after votes are cast and in sophisticated ways that deliberately mirror real voting patterns.

This new trend could be seen as early as a decade ago in Zimbabwe’s 2008 elections. At the time, the ruling ZANU-PF had never been less popular as the economy was tanking and hyper-inflation was running wild. Despite these problems, however, the party seemed so confident of victory that its campaign was half-hearted and shoddily executed.

It was caught unprepared then the day after the 29 March polls closed, when initial results from polling stations showed opposition leader Morgan Tsvangirai leading President Robert Mugabe by a factor of around 2 to 1.

Soon, the announcements slowed, then ceased altogether. The electoral commission called for patience and cited technical issues and the need for recounts.

What happened next is subject to many rumours and may never be known conclusively, but it was not until several weeks later that the official results were finally declared on 2 May. Despite the opposition’s projections and several earlier predictions of a first-round victory for Tsvangirai – some by a large margin – the electoral commissions declared him to have received just 47.9%. Short of a majority, a second round run-off would be required.

This was clearly no ordinary rigging. The time it took shows that painstaking efforts were taken to maintain a degree of credibility. The results had to be adjusted according to figures that had already been independently verified and they had to be manipulated to plausibly mirror the outcome of the parliamentary elections as well as previous voting patterns. A month to do all this was actually probably very good going.

This was one of the earlier examples of such sophisticated manipulation, but since then, it has become far more common for election results to be adjusted centrally in a subtle and somewhat believable manner, all beyond the gaze, remit and capacity of today’s observation missions.

Towards a new model

So how can election observation be made to match old and newer challenges in order to provide a genuine check on the conduct of elections?

Firstly, observation needs to be conceived of as a broader affair. It cannot be condensed into a short period of time, nor should it be seen as the exclusive activity of the accredited observer group. Civil society and other observer groups should be part of the process too.

An advance team of experts – or those briefed on the constitutional, electoral, and political affairs of the country – should be in place as a reconnaissance unit at least a month before polling day. And that team must be energetic and mobile, traversing the country. Observation is no country for old men, nor old women, the unfit, timorous or easily frightened.

In the 2010 Sudan elections, we took a simple executive decision: if we saw a European Union, African Union, or Carter Centre car, we weren’t out far enough. We kept going until there were no other observers for miles around, but then asked ‘why?’

Furthermore, officials need to know what they are looking for. For instance, subtle intimidation by means of cultural signs or local language may not be picked up by foreign observers, especially those veterans of the system who may be motivated more by the per diems than ensuring a fair ballot.

A youthful party militant rattling a box of matches – a silent promise that people’s property will be burnt if they vote against the government – can go unacknowledged. A euphemistic threat in a local language can slip under the radar. And the strategy behind targeted but seemingly low incidences of violence can easily fail to be fully appreciated.

Secondly, observation needs to adapt to current challenges. Insofar as African governments now prepare almost immaculate polling days – feats of organisation involving thousands of stations – election observation has accomplished something. But it needs a more extended and sophisticated presence during and after campaigning, including regarding the counting of votes and the testing of the count.

As Zimbabwe’s 2008 elections demonstrate, it is crucial to have officials present at all stages of the count as well as its verification. The process of counting needs to be carefully observed, but so does the moment that the electoral commission, party agents and accredited observers agree that the count reflects the parallel vote tabulation (PVT) – a methodology for independently verifying the results conducted concurrently – and when this agreement is transmitted.

Additionally, the official results should be tested against these PVTs as well as opinion polls and patterns from previous elections. The count at each stage must be tested against computer projections, calibrated according to results already submitted as well as a range of different conditions such as constituency type, electoral histories and voting patterns. This would give a measure of the plausibility and trustworthiness of the numbers being checked and announced.

This kind of number crunching is already done in many cases, not just by foreign “consultants” allegedly brought in by incumbents, but also by other interested parties and foreign embassies, though not for public release. It is time observer groups were given the same resources and capacity.

Having witnessed, or been involved in, election observation since 1980, seeing the state and effectiveness of observer missions in Africa today is highly dispiriting. Citizens depend on elections being free and fair to ensure their voices are heard, and observation therefore needs to be reflect the contemporary realities and challenges, not simply replicate a model cobbled together three decades ago.

The protection of electoral democracy today and tomorrow requires tools that cannot simply be borrowed from yesterday.

This is an abridged version of an article originally published here at Democracy in Africa.

*African Arguments.Stephen Chan is Professor of International Relations at the School of Oriental and African Studies (SOAS), London. 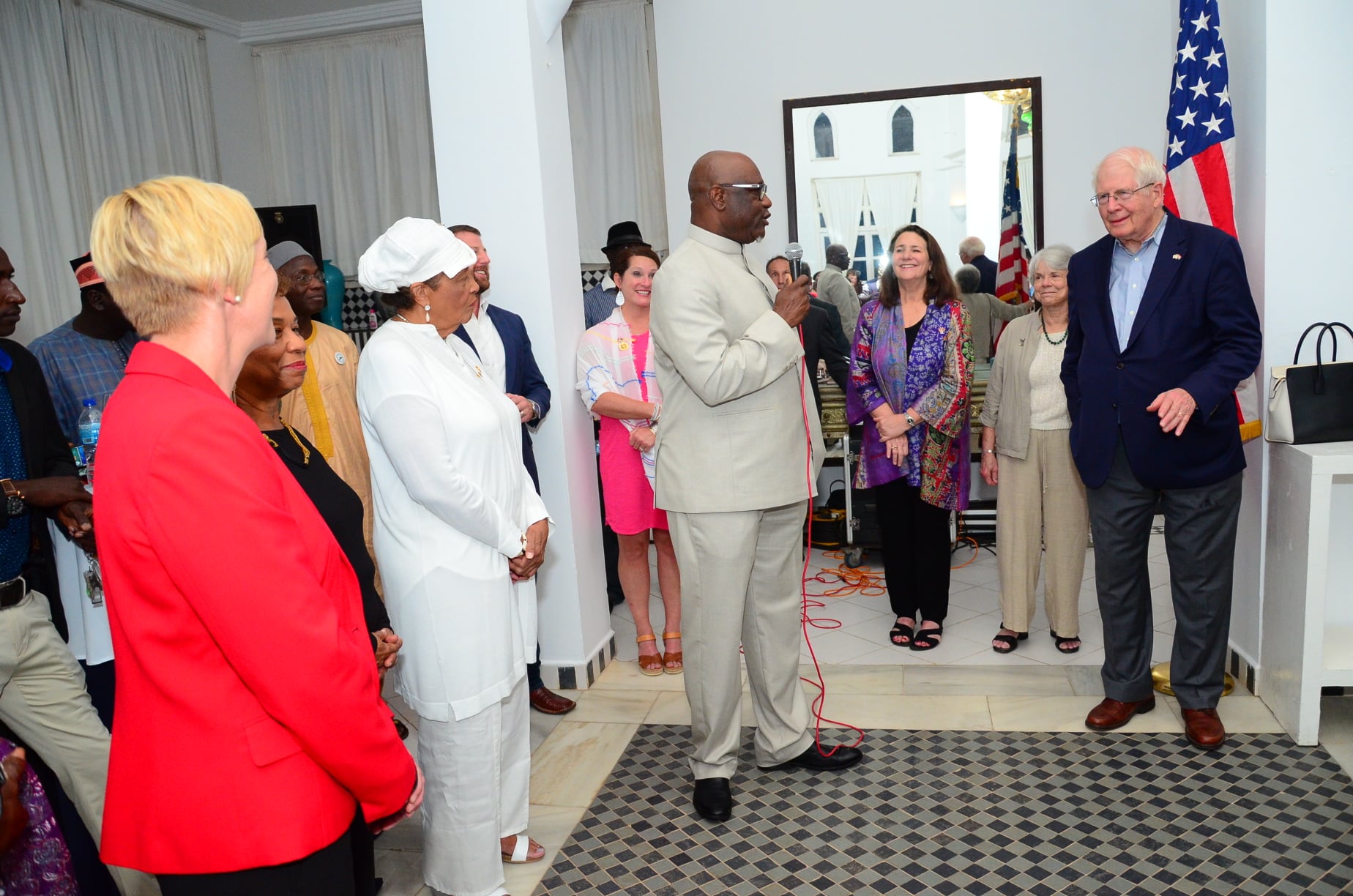 US Congressional Delegation Arrives in Gambia to strengthen democratic institutions

A Trip to Nairobi Inspired This One-of-a-Kind Company