After 22 years, a portrait other than that of former President Yaya Jammeh now adorns the walls of the Gambia Embassy in Washington,DC.

At a solemn ceremony at the Embassy on February 2, Ambassador Omar Faye was joined by staff, a few Gambians and friends of Gambia in unveiling a portrait of new President Adama Barrow.

Gambia is back on the rails and it is time for all hands to be put on deck in writing the next chapter of the country’s history, said Ambassador Omar Faye. Gambians are a proud, noble and a dignified people and that the recent political crisis were resolved without a shot or bloodshed speaks volumes to the political maturity of the people Faye said. 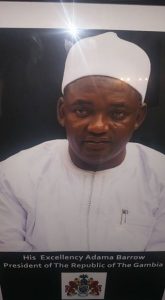 Faye said, President Barrow was speedily building up cabinet and called for unity and a common vision as Gambia starts another very important chapter in its history. Ambassador Faye lauded the support from the international community and from all friends who stood by Gambia in the last few months.

In a sign of growing confidence, visa demands to Gambia from the USA have experienced a surge.

“I have hoped and prayed hard for this moment,” said a lady who told this reporter she had not gone to Gambia for the last twenty years. 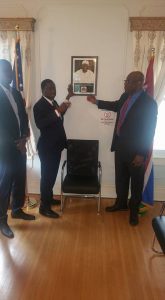 Many Gambians and Africans too a sigh of relief with a peaceful transition that was not very obvious. In power for some 22 years, President Yahya Jammeh was surprisingly beaten by little known opposition challenger Adama in elections last year. Yahya who initially conceded and even called to congratulate Barrow for his election, reversed his own decision and created a political crisis in the country with his refusal to handover. It took a combination of international diplomacy and military action led by the Economic Community of West African States(ECOWAS), for Jammeh to leave the country. Initially installed in Senegal, President Barrow made a triumphant return the capital Banjul after Jammeh’s departure.