This year, more so than usual, hunger is stalking Africa. The United Nations has declared a famine in parts of South Sudan and food insecurity is affecting tens of millions in nearly every geographic region of the continent.

The causes vary, as do the proposed solutions. But, experts say the worst crises are being fueled by war.

“Drought is an exacerbating factor in some contexts but conflict is really, really the major driver in the biggest emergencies,” said Chris Hillbruner, a senior official for the U.S.-funded Famine Early Warning Systems Network (FEWS NET).

“Drought can result in really severe food insecurity but usually, even when you have a severe drought, there’s an opportunity for recovery that starts with the next rainy season,” he said. “The challenge with conflict is that the conflict persists and persists and persists in many of these cases and so there’s little relief for the people.”

The United Nations International Children’s Fund (UNICEF) has warned that 1.4 million children are at imminent risk of death in just four countries: Nigeria, South Sudan, Somalia and Yemen. All four are in the midst of civil wars or insurgencies.

“Our first call and our first priority is for the warring parties in all these countries to give us the access that we need to reach those children,” said Najwa Mekki, spokeswoman for UNICEF.

The number at risk on the continent stretches well beyond the countries identified by UNICEF. The U.N. World Food Program (WFP) reports that 12 million people living in the Horn of Africa and Southern Africa are now dependent on food aid.

By all accounts, low rainfall caused by the El Nino weather phenomenon plays a significant role in the crisis. In Mozambique, aid organizations told VOA Portuguese that Tete and Gaza provinces are experiencing a prolonged drought and people have used up all the food they had saved.

In Ethiopia, farmers in the Borena zone told VOA Amharic that their cattle are emaciated and they are having a hard time selling them to buy food. Farmer Guyu Halake said cows that sold for about $440 before the drought are now sold for $17.

Another farmer, Fekadu Jeldeta, said if assistance is delayed, the current drought will shift from affecting livestock to costing the lives of people.

In Somalia, WFP said it is seeing warning signals similar to those seen in 2011, when drought and famine killed an estimated 260,000 people.

In Baidoa, VOA Somali spoke to Muslimo Abdi Abikar, a mother of nine who said she used to have a herd of livestock, including camels, goats and cows. Today, only two goats and a few camels remain, she said, and even the survivors are weak.

But observers say armed conflict plays an equal if not greater role in the hunger crisis. The threat of violence prevents farmers from planting or harvesting crops and prevents food trucks from reaching markets. If a government doesn’t act, it can take only a couple of months for food to become scarce in a particular area, triggering inflation.

In the Somali town of Las’anod, a grocer reported that, within one week, the cost of vegetables nearly doubled. A kilogram of tomatoes, for instance, spiked from $29 to $48.

What is a crisis?

Data such as this is used by FEWS NET to determine how to classify the level of food security across the continent, said Hillbruner. To do this, FEWS NET uses two key tools.

The first tool is called the Integrated Phase Classification, which examines a variety of indicators to determine how severe a food crisis is on a five-tier scale, ranging from minimal problems to humanitarian catastrophe.

The second tool is called “scenario development,” which allows analysts to forecast how food availability might improve or deteriorate in the near future.

“We look at how people access food and income in a typical year and then we look at whether or not there will be any shocks during the coming months,” Hillbruner says. “What is the forecast for rainfall? What do we expect is going to happen with food prices? Is there conflict occurring?”

Recently, FEWS NET warned that South Sudan could soon reach IPC Phase 5, the highest level on the scale. Phase 5 is defined as a famine marked by high levels of excess mortality. The group warned that Unity State in the north of the country is facing the most extreme lack of food.

Joseph Siegle, director of research at the Africa Center for Strategic Studies, said the latest food crises, particularly those in South Sudan and northeast Nigeria, show that famines may have climactic roots, but are made worse by man-made factors.

“The difference between the natural factors which create a challenge and then the actual outcome of famine is usually a human-made response or the lack thereof,” he said. “And I think that’s what we’re looking at today.” 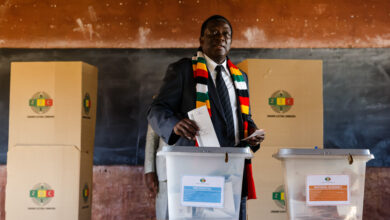