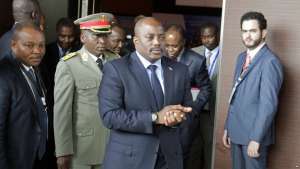 The government of the Democratic Republic of Congo has launched an investigation into possible abuses by security forces in the Kasai region. Conflict has been intensifying in that part of the country in the past six months but a video posted online late last week drew international attention.

The undated video appears to show Congolese troops firing at unarmed men and women purportedly affiliated to a militia known as Kamwina Nsapu. The video then shows the soldiers shoot injured people or bodies at point blank range. Several similar videos have since been shared online.

On Monday, the U.N. High Commissioner for Human Rights said it has received reports of government soldiers killing more than 150 people in the Kasai Central province over an eight-day period this month.

The government initially dismissed the video as a fake but changed course on Wednesday.

A statement issued by a government spokesman said that President Joseph Kabila has ordered an inquest into the events depicted in the video, as well as how and why the footage became public.

The U.N. has condemned both the militia for using child soldiers and the government for using excessive force, including, the U.N. says, automatic weapons and rocket-propelled grenades.

Anaclet Tshimbalanga, a Kasai-based human rights activist, told VOA the insurrection is being fueled by frustration over a lack of development in the region.

He says the militia have sticks and knives and sometimes hunting weapons, while the army uses all the powerful resources at its disposal.

The conflict in the Kasai region began last year when the customary chief of Kamwina Nsapu rejected the state’s authority and instructed his supporters to drive out the security forces. The chief was reportedly killed by the military in August, but clashes only became more frequent.

The militia is now active in at least the three Kasaian provinces of central D.R.C.

The violence has escalated amid political crisis in the capital. Elections planned for November were delayed and President Joseph Kabila has stayed in office even though his elected mandate has expired.

“We’ve seen political insurrections pop up in Congo for a variety of reasons over many years,” Stephanie Wolters of the Institute for Security Studies Africa told VOA. “I think the big difference is that the context has changed significantly. We now have a movement which is present in an area which is largely an opposition stronghold and where we have a government in Kinshasa which lacks legitimacy and we have the gross human rights violations which are being committed.”

The government says it has already detained soldiers over alleged abuses in the Kasai region, though not specifically in connection to the killings depicted in the video.