Tensions continue in Cameroon as the strike in English-speaking regions nears the end of its third month. 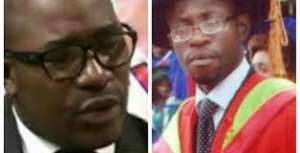 Three strike leaders pleaded not guilty Monday to charges of terrorism and insurrection before a military tribunal. They are accused of calling for the English-speaking parts of the country to secede and they could face the death penalty if convicted.

Nkongho Felix Agbor-Balla, Fontem Aforteka’a Neba and Bibixy Mancho are accused of organizing demonstrations in December that turned violent. The government says national flags were burned and the flag of a supposedly new independent nation was lifted. The government deployed the military, and at least seven people were killed in the unrest.

The three men entered the courtroom Monday joined by more than 100 lawyers working on their defense. Defense counsel Ben Muna says his clients were arrested illegally.

“The preliminary objection which we raised had to do with how the case was investigated which is the proof that the prosecution said they were not ready,” Muna said. “They don’t have witnesses.”

The case has been adjourned until March 23rd.

English-speaking lawyers and teachers have been on strike since November. They are protesting what they say is the overwhelming use of French in their sectors. But the strike has drawn other activists who accuse the state of marginalizing English speakers living primarily in the southwest and the northwest.

Some strikers are calling for a return to federalism, while other leaders want secession. The government says neither are options. Negotiations broke down over the issue earlier this year.

The strikers are also demanding the unconditional release of everyone arrested in connection with the strike. The government says 70 people are detained. Activists say the number is higher. More arrests happened this past weekend during unrest in the northwestern town of Ndop.

“I told Mr. Biya that please can you step in and take a position yourself on what is happening,” Fru Ndi said. “They are still shooting and killing. Teachers are locked up, and they are going around arresting people. Anybody who talks about federation will be arrested and locked up. I mean, all these things should be discussed.”

President Biya issued a statement Friday. He is open to dialogue but the president said national unity is not up for negotiation and all detainees must face justice.

The government has made some changes to address strikers’ grievances.

President Biya has transferred non-English speaking judges out of the striking zones and announced plans to recruit 1,000 bilingual teachers.

Students at a public school in Yaounde performed a sketch encouraging people to use both languages.

Teachers like Bibian Ayuk said they have received instructions to promote bilingualism. 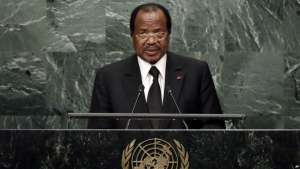 “When they have activities in schools, it is carried out in both languages and we encourage teachers when they go to school to carry out what they call jeux bilingue,” Ayuk said. “That is a five-minute talk in your second language while teaching.”

Both languages are used

English speakers constitute just 20 percent of the population but the constitution said English and French should be equally important.

Since the strike began, some official documents can now be found in English. English has also been added to signs for state radio and television and various government ministries. High-ranking government officials have begun giving public remarks in both languages.

Despite the changes, the government has drawn a hard line on the strike. In January, authorities banned public gatherings in the two affected regions and cut all internet access.