Beyonce’s pregnancy announcement portrait is now the most liked Instagram post of all time. But who is the artist behind the image?

The photo of Beyonce wearing a veil and cradling her stomach has now been liked over eight million times.

This might not be a big deal for the 35-year-old singer. But it’s a huge accomplishment for Awol Erizku, the artist who took the famous photo – and the entire series of pregnancy photos that Beyonce has since uploaded to her website.

Here are five things you should know about him.

Born in Ethiopia, 28-year-old Awol grew up in the South Bronx area of New York.

In 2014, he graduated from Yale University with a masters in fine art and his work often fuses photography, video installations and sculpture.

And while he’s now responsible for the most liked picture on Instagram, Awol has a humble following on his own social media accounts.

If you’ve tried to find more of his work on Instagram after seeing his portrait of Beyonce, you probably know already that his page is closed for business.

For example, his account has detail about “gallery” opening hours: timings for when his feed is opened up for public viewing.

He combines his art with music

With each of his exhibitions, Awol has released what he calls a conceptual mixtape.

Think of this as a kind of soundtrack to the artist’s latest creations.

One of Awol’s most played mixes was released alongside a film and photo project called Serendipity, which was a response to the Black Lives Matter movement in America.

This isn’t the first encounter he’s had with Beyonce

Before he helped Beyonce break the internet with her pregnancy announcement, Awol created a less extravagant photo of the Carters during their 2014 trip to Paris.

In the original photo uploaded to the singer’s Instagram, Beyonce and Jay Z stand posing in front of the Mona Lisa.

But after Awol photo shopped the image replacing Mona Lisa with one of his portraits, Vogue US shared the picture on their Instagram.

In an interview with Vulture, he got real about the lack of representation for people of colour in art history and museums.

“There are not that many coloured people in the galleries that I went to [growing up] or the museums that I went to. I was just like, ‘when I become an artist I have to put my two cents in this world’,” he said.

His work uses primarily black and Asian subjects and In 2013 he travelled to the Ethiopian capital of Addis Ababa to explore his parents’ birthplace.

There, with the help of translators and pimps, he created a series of nude sex workers posing on the beds of hotels around the city.

He’s also explored the Afropunk revolution in his work, collaborating with Vogue to create a photo series about black hair.

And for those who don’t fancy waiting for his Instagram gallery to open up, Awol’s work is also available on Artsy.
*BBC 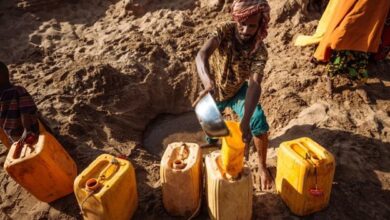