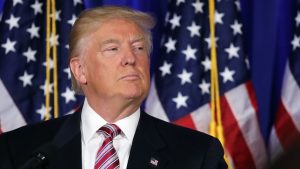 With his win of the White House, president-elect Trump has made no secret that his electoral college mandate to “make America great again” should apply to US foreign policy as well.

During the campaign and after his victory, Trump has unabashedly and unpredictably turned US policy on its head with a cascade of jaw-dropping statements about Mexico, China, Russia and Putin, ISIS, Muslims, NATO, Israel and more.
There is, however, one area of the world Trump seems to have eschewed altogether, an area where his skittishness could prove a boon.
For the past eight years Africa has been relegated to the back burner of US foreign policy. President Obama, whose father hailed from Kenya, elicited high expectations when he came to office and was seen, initially, as a potential champion for African causes. Yet, aside from his struggling “Power Africa,” a $7-billion presidential initiative launched in 2013 and aimed at doubling Africa’s electrical grid by 2030, Obama has little to show for when it comes to Africa.
Unlike his immediate predecessor, who morphed into a staunch Africa supporter with several African programs to boot (including his Presidential Emergency Plan for AIDS Relief, PEPFAR), the first black president departed from the White House in January 2017 with a legacy of soaring rhetoric and lofty slogans, but no tangible and successful African signature policies.
Enter Trump: bombastic and volatile, with neither affinity nor proximity to Africa, but a brazen sense of unpredictability. Collective speculation, as echoed by University of Johannesburg professor Peter Vale in a CNN opinion piece, holds that Trump’s foreign policy on Africa “is likely to be non-existent.”
Because Trump favors protectionism, the argument goes, he will turn his back on Africa and will happily don Obama’s mantle to continue Washington’s minimalist involvement in African affairs.
Trump, however, might just do the opposite and, just as George W. Bush, surprise many critics by implementing sensible policies vis-à-vis Africa.
One may wonder why. Why would Trump care about Africa? Why should Africa matter to a Trump administration that has pledged to build roads and bridges in North Carolina, not in South Sudan? The answer to these questions is simple: China. If Trump is serious about China, as he has ostensibly touted on the campaign trail and via twitter, if he is determined to flex his muscles against China, he should first challenge the rising power of the Red Dragon in Africa.
That’s because Africa has served as China’s economic launching pad for over two decades. Africa has fueled and will continue to fuel China’s booming industries for several decades to come.
With the US economic presence in Africa receding, China has occupied the void and driven competition out, including many European companies and investors. The Chinese are building infrastructures at a dizzying pace, from Cairo to Cape-town, in exchange for Africa’s rich mineral ores. Buoyed by state subsidies, Chinese companies are outbidding competition with many shoddy, built-on-the-fly construction projects, and take a disproportionate role in Africa’s extractive production and industries.
Thousands of Chinese companies are doing business in 50 African countries, down to some small-scale businesses operating in Africa’s remotest villages. Chinese state-owned companies are buying vast swatches of Africa’s arable land to set up large-scale agricultural projects. Together, they contributed to the estimated $300 billion generated by China-Africa trade in 2015. In addition to trade, China relies on loans to buttress its presence in Africa. In 2015, during the sixth Forum on China-Africa Cooperation held in Johannesburg, Chinese president Xi Jinping pledged a whopping $60 billion loan, aid, and export credit package to Africa.
Then there are America’s national security interests that should also matter as Trump is assembling his team.
Islamic terror groups, including Al-Shabaab and Al Qaeda operate cell groups in Africa’s rogue states. They are after American soft targets and it’s just a matter of time, if the trend is not reversed, until we see the kind of acts that targeted American interests in Nairobi and Benghazi. The Chinese, of course, prefer not to interfere with what they consider to be African states’ internal affairs.
African dictators are leery of a Trump presidency, and for good reason.
A new sheriff is in town, and unlike the one he will replace in January he may not be all talk and no cider. With his penchant for contumely and tit-for-tat escalation, Trump might be the game changer that shakes things up in Africa and disrupts corrupt political regimes that have quietly survived and thrived under Obama’s two terms in office. They have largely ignored Obama’s paper tiger rhetoric, but Trump’s iron fist may well be what will compel them to get in line and relinquish their illegitimate power.
Why? Because dictators and failed states are bad for business. They feed on corruption, serve as breeding ground for terrorism, and have no qualms about letting their nuclear raw materials fall into wrong hands.
Democratically-elected African leaders, on the other hand, may find in President Trump an unlikely ally, a more decisive and unfettered leader to work with to advance an economic and political agenda that could benefit both the US and Africa.
As the global spotlight shines on his presidency, Trump might prove his critics wrong by dealing differently with Africa and restoring America’s clout on a continent that cannot afford to put its eggs in the same basket and should not let China’s monopolistic drive dictate the terms and pace of its development.

The opinions expressed in this commentary are solely those of the author.

*CNN Didier Gondola is professor and chair of the History Department at Indiana University-Purdue University in Indianapolis and the author of several books on colonial history, politics, China-Africa, and popular cultures in Africa. The opinions expressed in this commentary are his.