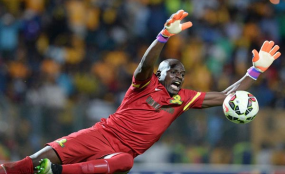 Denis Onyango is the first Ugandan athlete to be recognised internationally.Photo: Daily Monitor

The defining moment of many a sportsman’s career is associated with success; a winning goal, a world record or a stunning goalkeeping save.

There are those however whose careers perhaps might not have taken a turn for the better had they not suffered misfortune. Uganda Cranes goalkeeper Denis Onyango seems to fall in the latter category.

Following what had otherwise been an impressive breakthrough season with SC Villa, the then young goalkeeper committed a howler while featuring for the national under-23 team.

A seemingly harmless Sam Mubiru back pass to rolled beneath his foot and into goal, to turn what looked like a comfortable 3-1 win over Seychelles in a 2004 under U23 Olympic qualifier into a 3-2 result.

Luckily for him, the team managed to 2-2 away result to progress but the error left the player contemplating giving up on his career.

“I made a mistake and we conceded and thereafter I felt like the whole Uganda was against me,” he narrated to the Daily Monitor earlier this year.

“But coach Micho told me to believe in myself because by then I had just signed for Villa and he saw potential in me. He comforted me,” he said of the Serbian, his club coach at the time.

What happened after that incident seemed to indicate that while he was still prone to a few blunders, he was ready to persevere, an attribute that he would need in plenty over the next decade. For those close to him, it is that character that has helped him overcome his many challenges until the accolades started flowing in. “He is social and usually calm,” Edward Sssali a former Cranes defender and childhood friend described him, his assertion not too different from Ivan Onyango the goalkeeper’s elder brother. “He has always loved football.

What stands out from our childhood were those moments when Denis would disobey our parents’ orders ,” recalled Ivan. “He would often leave in the morning and on return would be told to go back to where he’d spent the day. But he always knew he would always be forgiven so the cycle continued,” he further explained. “His life has always been about sports,” Ivan said of Onyango who grew up in the Uganda Railways staff quarters Nsambya. Born in a family of six children to Gabriel Onyango and Oliver Musoke Nakiboneka, Onyango played various games.

“He was offered scholarships at almost all the schools he went to. In fact our parents wanted him to go to Kololo but they changed their minds because of the scholarships,” he further explained. Growing up, some might argue he was not the most talented goalkeeper of his generation. He was often in the shadows of Tony Odur when the pair was still at Friends of Football (Fof) Academy and the latter was preferred in goal while under the tutelage of Eddie Butindo.

Several years later, Onyango who is married with four sons seems not to have changed too much in terms personality. “Of course there are some places he can no longer go to but he keeps in touch with most of his childhood friends,” added Ivan.

One such acquaintance is Richard Mugalu who started out as the Mamelodi Sundowns goalkeeper’s kit boy from their days at Villa Park but who regularly moves with him whenever he is back from his South African club.

Such is the pair’s closeness that Onyango once opted against joining the Cranes’ camp to attend a vigil when Masaba lost a relative.

From SC Villa, Onyango was reunited with Micho at Ethiopia’s St George before moving down to South Africa where after initially impressing with Supersport was released by the South African club in 2010.

This prompted a move to fellow topflight club Mpumalanga Black Aces in 2010. A year later he joined Sundowns was often found himself on the fringes of the first team.

This included a loan move to then Premier Soccer League (PSL) side Bidvest Wits in 2013 before he finally dislodged Zambian goalkeeper Kennedy Mweene and the South African Wayne Sandilands in 2015.

He is currently one of the longest serving players on the national team having kept goal for more than a decade. The reigning sports journalists’ footballer of the year had a stellar 2016. He is short-listed for the African Player of the Year Based in Africa award set for January 5, 2017 in Abuja, Nigeria alongside club-mate Khama Billiat and Zambia’s Rainford Kalaba.

He also won the ABSA Premiership and the CAF Champions League with his club as well as winning the PSL goalkeeper of the year accolade. Despite inexplicably being ignored for the Fufa player of the year accolade, Onyango last month became the first Ugandan player to feature at the FIFA Club World Cup.

Prowess. He kept four clean sheets out of six matches during the 2017 Africa Cup of Nations qualifiers and did not concede a goal in Namboole during that road to Gabon.

Awards. He is a contender for the Caf Africa Player of the Year – Based in Africa Award alongside Mamelodi Sundowns teammate Kharma Billiat and TP Mazembe’s Zambian Rainford Kalaba.

He was voted best goalkeeper at the South Africa ABSA Premiership Awards. He was also a nominee for the 2016 Player of the Year at the Airtel Fufa Awards.