South Africa: Cyril Ramaphosa Is Not Going to Be President – Malema 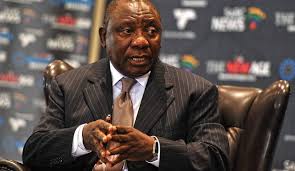 EFF leader Julius Malema has weighed in on the ANC succession debate ahead of the ruling party’s 54th national elective conference in December.

Malema was speaking to journalists at the EFF headquarters in Johannesburg following the freedom fighters’ plenary meeting at the weekend.

He gave his personal view on the candidates expected to battle it out for leadership when President Jacob Zuma steps down as president of the party in December.

“Nkosazana Dlamini-Zuma will be president if Zuma wants her to be,” said Malema.

But the EFF commander-in-chief said if she does emerge victorious it would have little to do with affirming her abilities to lead the party as its first female president.

“That thing of South Africa being ready for a female president is just rhetoric. He’s trying to sound smart, to appear like he supports women,” Malema said.

He claimed Dlamini-Zuma’s task, if she does take over from Zuma, would be to protect him from facing corruption charges.

“Nkosazana is corrupt, how do you accept an award from the Guptas if you are not corrupt? How do you legitimise such an illegal institution that is stealing money from our government?” asked Malema.

In 2015, Gupta-owned broadcaster ANN7 named her “South African of the Year”.

Malema said Dlamini-Zuma would likely run into trouble if she expressed her views on the State of Capture report, which was the result of a probe by former public protector Thuli Madonsela.

Madonsela looked into allegations of undue influence over state-owned enterprises and key government decisions, including the appointment of ministers by the influential family, known to be close to the president.

‘Cyril is about himself’

“If she says the Guptas have the right to do business, whites are against them because they are black then you know where she stands, she is part of the cartel.

“If she says they are wrong [and] the report must be investigated fully, then the premier league [a faction within the ANC consisting of premiers from the North West, Free State and Mpumalanga] will say she is going to arrest…this one,” he added.

Malema said he believed the president remained unsure on whether to back Dlamini-Zuma or not, telling journalists “the chief will have to give a final word”.

The EFF leader said he did not believe current deputy president of both the ANC and the country, Cyril Ramaphosa, even stood a chance.

“Cyril loves positions. It’s about himself.”

Malema accused the politician turned businessman, who later came back to politics, of being so bitter over not being elected deputy president of the party and losing out to Thabo Mbeki in 1994, that he failed to attend South Africa’s first democratic president Nelson Mandela’s inauguration.

“How can you entrust such a person with such a huge responsibility? Who thrives on ‘me and me alone’?” Malema said.

ANCYL President Collen Maine told Reuters recently that when the league made its pronouncement, it would send shockwaves throughout the country. He said South Africa needed a bold leader.

“Ace is the youth league candidate but it’s waiting for the premier league, with an endorsement from the president, to announce,” said Malema.

Malema also rubbished Magashule’s capacity to change the balance of forces and property ownership in the country, claiming he had failed to make such an impact in his own province throughout his tenure there.