Leicester forward Riyad Mahrez has won the Confederation of African Football’s player of the year award. 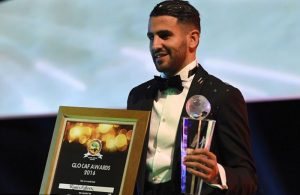 The 25-year-old Algerian, who helped Leicester to the Premier League title, is also the PFA Player of the Year and BBC African Footballer of the Year.

“It’s never easy to win a big award like that,” Mahrez said.

“I’m very happy to win because obviously it was against two big players.

“What happened last season was amazing, we knew it wasn’t going to happen again – and it won’t happen again I think, for a small team like Leicester,” added the first Algerian and North African to win the prestigious individual honour since its inception by Caf in 1992.

It was Oshoala’s second title after winning in 2014 in Lagos. And it was double delight for her as the Super Falcons were adjudged Women’s National Team of the Year following their record-extending eighth title at the Women’s Africa Cup of Nations in Cameroon in December 2016.

Two more awards came the way of Sundowns, who were named club of the year with Pitso Mosimane winning coach of the year. 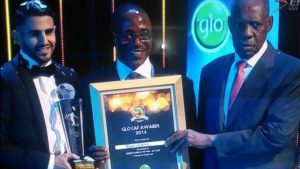 Uganda’s qualification for the Africa Cup of Nations after a 39-year wait was recognised with the national Team of the year award.

Gambian official Bakary Papa Gassama was named referee of the year for the third time in a row.

Manuel Lopes Nascimento, president of Guinea Bissau Football Federation was named football leader of the year – his country qualified for their first major continental championship by reaching the Nations Cup in Gabon.

Ivorian striker Laurent Pokou, who died in November, was post-humously recognised with the African Legend award, together with Cameroonian Emilienne Mbango, one of the pioneers of women’s football on the continent.

The Platinium Award went to President of Nigeria Muhammadu Buhari.