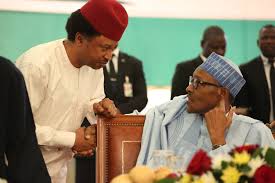 Senator Shehu Sani during plenary on Tuesday slammed a letter signed by President Muhamadu Buhari rejecting the letter from the Senate requesting for the removal and prosecution of the Secretary General of Federation, Engr. Babachir Lawal on issues bothering on abuse of office.

The letter read by the Senate President stated that it cannot rely on the recommendation of a Senate committee report which it claimed was signed by 3 out of 9 members. However in a swift response from Sen. Shehu Sanni of Kaduna state who is the chairman of the senate ad hoc committee which was set up to investigate the matter claimed that the Presidency was being economical with the truth. According to him, 7 out of 9 members signed the original report we sent to the presidency as he also claimed that his name was deliberately omitted from the members of the committee despite him being the chairman of the committee. He also claimed that most of the companies involved were invited as well as the SGF who was notified of his invitation but he never showed up to debunk the allegations made against him for taking advantage of the humanitarian crisis suffered in the North East, where he awarded contracts to companies and organizations where he has interests. Sen. Sanni called on the President to show with the same level of concern he shows towards the Legislature when issues of corruption are raised against members of his cabinet, for him the cleaning has to begin in Mr. President’s kitchen cabinet for it to be seen as genuine.

Some senators even echoed the view that the anti corruption war shouldn’t be about specific individuals and therefore President Buhari can still find individuals within the agency or outside who can also provide the necessary bite in the fight against corruption. Could there be anything special about Magu? One senator asked when walking out of the chambers? What has he been able to achieve despite being in acting capacity for nearly one year now? Has there been a single conviction? Shouldn’t the presidency have requested for his security report before sending him for Senate screening, rather than allow the senate to request for his report from the DSS themselves?

These questions revealed that these letters didn’t go down well with most Senators as the murmurings were heard although the senate President decided that there wouldn’t be a debate on the letters at that moment.

However Senator Eninnaya Abaribe who spoke on the 2017 budget also x-rayed some of certain items that perennially re-appear in the budget each year. According to him, there are certain items which we all know are not easily perishable such as computers and some other hardware which do not d=require changing or replacing every year but how they keep popping up in the budget remains a mystery to the senate. So he therefore called the legislature at large when considering the budgets to look critically into these rampant cases of repetitive and irrelevant items re-appearing in the budget. For him, “the more things change the more they look the same”.