Abuja — As the rumour mill went into overdrive over the alleged death of President Muhammadu Buhari, who is on a medical vacation in the United Kingdom, his media aide, Mr. Femi Adesina yesterday said there was no cause for alarm over the health of his boss, the president.

In a message he posted via Twitter last night, Adesina said: “Why do the heathens rage, and the people imagine vain thing? The rumour mill on overdrive is pure fiction. No cause for alarm on PMB.”

Adesina was responding to a rumour propagated mostly through the social media that the president had died in the United Kingdom.

The presidency also refuted reports that acting President Yemi Osinbajo had been asked to resign by some governors from the northern section of the country.

A statement by the Special Adviser, Political Matters in the presidency, Mr. Babafemi Ojudu, described the report as a fabrication.

He denied claims that Osinbajo had been held hostage by some governors who tried to compel him to resign, adding that the vice-president was behind his desk attending to matters of state and yesterday presided over a meeting of the Federal Executive Council (FEC) at the Presidential Villa, Abuja.

Earlier yesterday, the Minister of Information and Culture, Lai Mohammed, equally dismissed the rumour of Buhari’s death, describing it as a “silly thing”.

The minister, who shrugged off attempts by State House correspondents to react to the rumour that started making the rounds at the weekend and gathered momentum yesterday, after the FEC meeting, said there were more serious matters of state to discuss than engaging in frivolities.

He decried the rumour, lamenting that it was only in Nigeria that citizens would wake up in the morning and wish their president dead.

He said: “I don’t want to lend my voice to a very silly thing. I will not join this debate. I think there are more serious issues of state to discuss than this issue.

“It’s only in this part of the world that you wake up in the morning and you say the president of the country is dead. I will not join that kind of debate at all.”

Despite the information minister’s attempt not to be drawn into the unfounded stories on Buhari’s death, later yesterday he issued a statement through his media aide, Segun Adeyemi, asking Nigerians to disregard the subversive messages being circulated via texts messages and the social media.

He alleged that the fabricated messages were “orchestrated by those who feel threatened by the emerging order”.

He added: “There is no iota of truth in the messages being circulated on the health of the president, who is hale and hearty, and the purported emergency meetings of the state governors in Abuja or anywhere.”

He said the naysayers also resorted to the use of ethnicity and religion as tools to divide Nigerians, overheat the polity and cause panic among the citizenry, in addition to using fake news and disinformation to distort government activities.

Mohammed said while opposition and criticism are all part of democracy, “the crafting and circulation of subversive materials and scare-mongering are not, hence the full wrath of the law will be brought to bear on those who are bent on subverting the state”.

“The source/sources of the fabricated messages are already being investigated and the authors should prepare to face the consequences of their actions.

“The emerging trend of resorting to destabilisation and scare-mongering is not unexpected, considering this government’s clampdown on the corrupt elements in the society, the plugging of all financial leaks which has derailed the gravy train of the looters of the public treasury and the enthronement of probity and transparency in the polity.

“While we will neither stifle press freedom nor abridge the citizens’ right to express themselves freely, whether through criticism or protests, the security agencies will neither allow any resort to violence nor a willful subversion of the state for whatever reason,” he warned.

Buhari is from Katsina, one of the North-west states.

“It does not matter what other people say. We are speaking as the representatives of our people from the North-west zone; that we have confidence in our president and we have no regrets about that.

“We have to say emphatically that Mr. President has done a lot in the area of security in the North-east. We have passed a vote of confidence on his government and the leadership of the House under the Speaker, Hon. Yakubu Dogara,” Doguwa said.

“Our people in the zone, even with the challenges we have, can now sleep with their two eyes closed. Nigerians are commending the efforts of the president and we must continue to identify with him,” the Chief Whip said.

“2019 will come and we are also going to be there; we will be able to engage it as it comes. I want to tell you that Nigerians can’t afford to miss Mr. President in 2019 as it comes,” he said.

Doguwa disclosed that the 2017 budget proposal was also discussed at the meeting, adding that the lawmakers arrived at a resolution that the zone was not adequately represented in the budget.

“We have been under-represented in general infrastructure in the budget. In the power sector, in the education sector, the road sector, we are not well represented.

“We have the mandate of our people, as their representatives, to voice out this position. Our roads have been death traps,” he said.

The caucus, Doguwa stated, resolved to get more projects for the zone, after a thorough study of the allocations to the ministries, departments and agencies (MDAs) of government.

Also joining the fray, Senate President Bukola Saraki, in a statement last night, dismissed allegations that he had been asked to step in as president of the country.

He said: “My attention has been drawn to a speculation on some online media about a supposed meeting of some governors who held Vice-President Yemi Osinbajo to ransom and asked me to take over the presidency.

“My first initial reaction was to ignore this empty rumour, but after being inundated with calls from across the country and abroad, it became necessary for me to make this clarification.

“It is a good thing that the presidency had dismissed the speculation and showed that there is no substance to it. However, I feel it should be known that those behind this baseless, empty and unintelligent mischief are those who do not love this country.

“Such suggestions as contained in the speculation can only bring ill will, disunity, and crisis to the country and I therefore advise the sponsors to desist immediately.

“More importantly, these troublemakers should refrain from linking my name name to their evil plot.”

Meanwhile, lawmakers from the North-west Caucus in the House of Representatives have passed a vote of confidence on the president and expressed their tacit support for him in the 2019 presidential polls.

The 94-member caucus, at the end of a two and a half hour meeting yesterday evening, said Buhari had excelled in office, almost two years into his tenure.

Briefing newsmen on the resolution taken at the closed-door meeting, the leader of the caucus, Chief Whip Alhassan Ado Doguwa (Kano APC) said the resolution to pass a vote of confidence on the president was taken as representatives of the people. 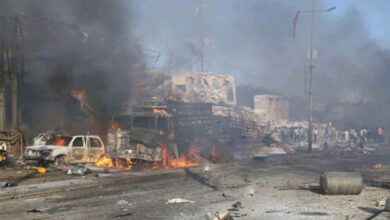