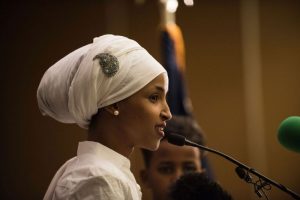 On Nov. 8, Ilhan Omar made history when she was elected the first Somali-American lawmaker in the U.S.

“My election win offers a counter-narrative to the bigotry in the world,” Minnesota State Representative-elect Omar, 34, says in the new issue of PEOPLE. “This is a land of immigrants, and most come here for opportunity, a second chance. It’s our time to fight for the America we know we can have.”

Omar herself is an immigrant, having fled her civil war-torn home country of Somalia as a child.

“The war started when I was 8,” says Omar, who recalls witnessing the terrors of conflict. “One night militia tried to break into our home, and the exterior was riddled with bullets. My family left our neighborhood, passing through dead bodies and debris.”

Not long after, Omar says she and her family left their home and relocated to a refugee camp in neighboring Kenya.

“I no longer had a bed of my own, the privacy of a shower in my own bathroom — we were essentially homeless,” Omar says. “I would fetch water, and my family would reward me with a shilling at the end of the day, so I would go see a movie in the village next door in a makeshift theater: a hut.”

After four years years in that Mombasa refugee camp, Omar and her family were sponsored to move to the United States, arriving in New York before moving to Arlington, Virginia, where Omar, then 12, began middle school.

“ had missed years of education, so I didn’t really speak English,” Omar says. “My sisters and I learned by practice, watching TV with the captions on, reading and trying to repeat words back to each other.”

After two and a half years, the family moved once again, this time to Minneapolis, where Omar faced another difficult adjustment: high school.

“Not a lot of the kids knew how to coexist with people of a different background, so we created a unity and diversity program,” Omar says. “We’d have meals together and connect through experiences and stories. I was finally just ‘Ilhan,’ not ‘that Somali girl.’”

For more on Ilhan Omar, pick up the new issue of PEOPLE, on newsstands everywhere now.

That United Nations-esque group in high school laid the groundwork for Omar’s future in community organizing and politics, which she continued to nurture by studying political science and international policies at North Dakota State University.

“I believe women and minorities often wait for permission to be invited to something; we need to stop doing that,” says Omar, who managed a 2013 city council race and was hired on to work at city hall in Minneapolis before getting elected by Minnesota’s District 60B in 2016.

While she’s always been passionate about politics, Omar’s fervor has only been compounded since becoming a mother.

“My kids are the reason I continue to strive for something better,” she says of her children with husband Ahmed Hirsi: son Adnan, 11, and daughters Ilwad, 4, and Isra, 13. “They know, as kids who are Muslim, Somali, black Americans, that they’ve always been part of a struggle and that change isn’t easy.”

Even so, Omar hopes to use her new statehouse position to make a change. And despite the turbulent political year leading up to President-elect Donald Trump‘s election in November, Omar remains hopeful.

“I find hope,” she says, “in knowing that I belong to a state that has a lot of people who are champions of change and progress; that we will rise up and fight for justice and equality; that ultimately love will trump hate.”