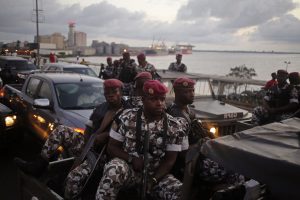 ABIDJAN, Ivory Coast (AP) — Heavy gunfire erupted Saturday at a military camp in Abidjan, Ivory Coast’s largest city, and parts of the city center were on lockdown as officials grappled with an army mutiny that appeared to be gaining momentum.

Soldiers also fired their weapons for a second day in Bouake, Ivory Coast’s second-largest city, as well as in the western city of Man, witnesses said.

The unrest points to lingering security worries in Ivory Coast, which boasts Africa’s fastest-growing economy and is eager to move past its history of conflict.

President Alassane Ouattara assumed office in 2011 after more than 3,000 people were killed in a crisis triggered by former President Laurent Gbagbo’s refusal to step down.

The unfolding mutiny among soldiers demanding salary increases and faster promotions started in Bouake Friday morning, according to a defense ministry statement.

Defense Minister Alain-Richard Donwahi arrived in Bouake on Saturday afternoon to negotiate. Donwahi was accompanied by Issiaka Ouattara, a former rebel leader known as Wattao who participated in the failed coup that split the country from 2002 to 2007. He currently serves as second in command of the army’s elite Republican Guard.

President Alassane Ouattara had traveled to Ghana for the inauguration of President Nana Akufo-Addo, but he returned late Saturday afternoon and was expected to preside over a cabinet meeting.

The gunfire Saturday at the Akouedo camp, located in Abidjan’s residential Cocody district, began at around 8 a.m. and lasted for two hours, according to Louise Kouame, who lives nearby.

“It’s calm for the moment, but we are more and more afraid,” Kouame said.

Security forces blocked off roads leading to the camp, Barricades also were erected in downtown Abidjan amid unconfirmed reports that mutinous soldiers had reached the military headquarters and defense ministry.

The ministry denied those reports on its Facebook page

Abidjan residents stocked up on food and water, citing fears the city would see more violence. The U.S. embassy advised staffers to keep off roads and to stay near their homes, while France advised restricting travel to the country’s interior and avoiding military camps in Abidjan.

A similar scene played out in Bouake, where gunfire began at 3 a.m. and continued for several hours, taxi driver Moussa Fofana said.

Ouattara faced huge challenges in trying to create a unified army following the 2011 crisis, and there is still a clear lack of discipline, Cynthia Ohayon, a West Africa analyst for the International Crisis Group, said.

The government used payouts to appease soldiers after a revolt in 2014. Ohayon predicted a similar approach would be tried again, and she said it was important for the situation to be resolved quickly.

“The more it drags the more likely it is to get out of control,” she said.