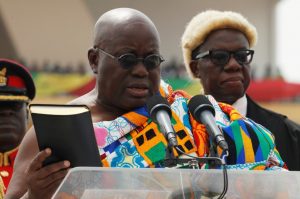 Ghana has long been one of Africa’s bright spots, politically speaking. It is stable, if not prosperous, and has seen peaceful transitions of power since it became a democracy in 1992. And Saturday, Ghanaians gathered in Independence Square in the capital, Accra, to witness another: the inauguration of Nana Akufo-Addo as the country’s fifth elected president.

But the moment of pride was tarnished, though it may not have been immediately obvious to those in attendance. Akufo-Addo had lifted lines in his 30-minute speech word for word from the inaugural addresses of two U.S. presidents.

The first came from George W. Bush’s speech in 2001. “I ask you to be citizens: citizens, not spectators; citizens, not subjects; responsible citizens building your communities and our nation,” he said — or, well, they both said.

And then came a line straight from Bill Clinton’s 1993 speech, substituting Ghanains for Americans: “Though our challenges are fearsome, so are our strengths. Ghanaians have ever been a restless, questing, hopeful people. And we must bring to our task today the vision and will of those who came before us.”

A helpful journalist on Twitter put the clips side by side.

The communications director for the office of the president, Eugene Arhin, took to Facebook to apologize for the “oversight.”

“My attention has been drawn to references being made to a statement in the speech delivered by the President of the Republic, Nana Addo Dankwa Akufo-Addo, at his swearing in on Saturday, January 7, 2017, which was not duly acknowledged,” he wrote. “I unreservedly apologise for the non-acknowledgement of this quote to the original author. It was a complete oversight, and never deliberate. It is insightful to note that in the same speech were quotes from J.B Danquah, Dr. K.A. Busia, Dr. Kwame Nkrumah and the Bible which were all duly attributed and acknowledged.”

Ghanaian social media lighted up with derision at the “oversight,” though others suggested that given the way things were going in other African countries, the plagiarism matter seemed pretty tame. One user, from Uganda, had this to say: