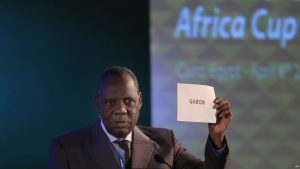 FILE – President of the Confederation of African Football, Issa Hayatou, announces that Gabon will be hosting the 2017 African Cup of Nations, April 8, 2015.

As Gabon gets ready to host this year’s Africa Cup of Nations football (soccer) tournament, local businesses are hoping for a much needed boost to the economy.

A song supporting the national team of Ivory Coast, nicknamed the Elephants, blasts through speakers at the Oyem market square in Gabon.

The Africa Cup of Nations doesn’t kick off for another week, but diehard supporter Alain Traore is already here, with his music.

He says his wish is for the Elephants to understand that they are defending their country, Ivory Coast. He says they should forget the quarreling and squabbles that have always brought misunderstandings to the team.

Ivory Coast will play here in northern Gabon alongside the teams from the Democratic Republic of Congo, Morocco and Togo in group C.

On the streets of Oyem, discussions are mainly on the bounce the tournament may bring to the economy.

Slumping global commodity prices have hurt Gabon in the past three years. Global oil prices have dropped by about 70 percent. The government relied on petroleum for about half its income, and about 80 percent of exports.

He says although the inflation rate has remained stable at about 3 to 4 percent, external trade has been very worrying. He says added to that, the business climate has deteriorated as Gabon has lost six places in the Doing Business index. He says Gabon, along with other central African states, are looking to be increasingly hostile environments for investments. He says the debt level of Gabon is rising and the economy is becoming highly non-competitive.

Restaurant owner Loga Agnes says she is hoping the people coming for the tournament will boost her sales.

Agnes and other business owners hope that AFCON 2017 will revive interest in Gabon as a tourist destination. Billions of people around the world are expected to tune in to watch the finals giving the players, and Gabon, a chance to shine.

The country will use four venues at Libreville, Franceville, Port Gentil and Oyem for the 16-team tournament.